Sisters of St. Joseph of BostonPress Releases5/26/22 Call to End Gun Violence from over 23000 Catholic Sisters and Partners 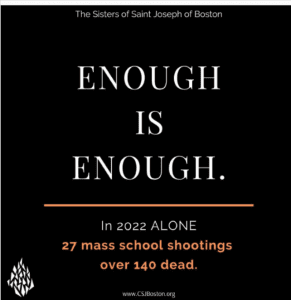 As part of the U.S. Federation of the Sisters of St. Joseph,
we join in this collaborative statement.

The undersigned communities represent over 23,000 Catholic women religious, associates, and partners in mission in over 30 states.

Today, we are all residents of Uvalde, Texas, a relatively small community more than 80 miles from San Antonio. On Tuesday, May 24, the world witnessed another horrific, senseless tragedy as a lone gunman shot and killed 21 people, including 19 students, at Robb Elementary School just two days before the end of the school year.

We are once again heartbroken. Whether in Uvalde, Parkland, Newtown, or Littleton, all of us, God’s people, deserve to live in communities free of gun violence. The massacre of children is abhorrent and should never be accepted as “normal.” These acts of violence can no longer be tolerated.

They have to stop. It has to end.

Both shooters in Uvalde and Buffalo legally obtained their weapons. The United States, when compared to peer countries, has far more guns per capita, incidences of gun violence, and some of the least restrictive gun laws.

We challenge ourselves, our Church, and all people of goodwill to rededicate themselves to end the scourge of gun violence in this country. To pray for the conversion of society. We plead that all continue to contribute to this movement by taking some of the actions listed below.

Actions we can take:

Send messages to national elected officials to pass gun safety measures through Moms Demand Action, Sandy Hook Promise, or March for Our Lives. If you have a Republican Senator, consider calling to ask for their support for the Background Check Expansion Act. If your senator is Kyrsten Sinema or Joe Manchin, call to ask for their support for a filibuster exception for gun safety legislation.

Pray in solidarity with protests at the NRA convention on Friday, May 27th.

Join or pray in solidarity with national and local March for Our Lives marches on June 11.

This statement and call to action was prepared by representatives of several religious communities: the Sisters of Charity of Leavenworth, U. S. Federation of the Sisters of St. Joseph, and the Sisters of Providence of Saint Mary- of- the- Woods, Indiana on behalf of the undersigned communities