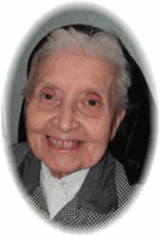 Sister Aline was a petite, quiet, gentle lady, who never sought any notoriety.  Her death occurred late Monday afternoon as peaceful as her existence.God called Sister Aline silently amidst the active daily life occurring on the second floor here at Bethany.Her final years of life were spent noiselessly, living patiently and serenely, while interiorly aware of God loving and caring for her.It was only last year, in December, that I watched Sister Aline and other Sisters from the second floor, place ornaments on the Christmas tree in the Assumption room.I imagined that Sister Aline knew just where to place her ornaments on that tree; perhaps she was remembering all the occasions she decorated her classrooms and rooms in the convents in which she lived.

The Consensus Statement of our Constitution begins with the sentence –

Stimulated by the Holy Spirit of Love and receptive to its inspirations, the Sister of St. Joseph moves always toward the profound love of God and love of neighbor without distinction.

In many ways this sentence speaks to me of Sister Aline D’Orazio. Baptized Theresa Anne in Franklin in 1915, the daughter of immigrant parents from Italy, Theresa was one of eleven children.There is no doubt her loving family nourished her vocation and that of her siblings.

At 24 years of age, answering an invitational call from God, Theresa entered the Sisters of St. Joseph in 1939, dedicating her religious life as Sister Aline to the Congregational ministry, which at that time was Catholic education.

All of Sister Aline’s life was spent as a primary school teacher in various elementary parish schools of the Archdiocese.Sister’s skills as a first/second grade teacher were praised by parents for her proficient education as a primary school educator.As her students moved into each succeeding grade they became aware of the learning skills she had taught them, especially the necessity of having each academic skill perfected to its highest degree.All who knew Sister Aline witnessed her to be a professional teacher as well as a person who was meticulous!

Sister’s last mission and classroom were at St. Catherine School in Norwood. Here she had been given a promotion – Grade 3!As time passed, it had to be distressing for Sister Aline to leave a ministry she loved and had been so focused and dedicated, to transition to a new ministry at Fontbonne Hall.Can you just imagine the number of children that passed through Sister’s guiding hands in those past years as they entered her classroom each day?I am sure that the Catholic schools at which Sister Aline taught recognized that this unassuming religious woman merged within her life the charism of the Sisters of St. Joseph, with the goals of Catholic elementary education to which she was entrusted.

In today’s funeral Mass the readings from Isaiah and the Philippians speak about being called by God and told, “You are mine”, and to possess an attitude that is the “same as Christ Jesus”. For Sister Aline to be able to accomplish in her lifetime of 100 years, I believe, she knew in her heart, that she was called personally by name, and that she had to accept her humanity “as Christ was found in the likeness of a human being”.This she had to do in order to demonstrate by her individuality and her tranquil demeanor, the loving disposition that would enable her to serve the dear neighbor – her students without distinction. The promise given in the chapter of St. John’s Gospel, “I am the vine, you are the branches, live on in me as I do in you” were words that Sister Aline knew and lived.

We, the Sisters of St. Joseph are grateful to you, the D’Orazio family for your gift of Aunt Theresa, Sister Aline. We give thanks to God for her presence in our Congregation for these past 77 years.

Sister Aline, may your soul, and the souls of all the faithful departed, rest in peace.