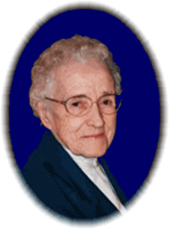 Our Constitution on Spirit and Purpose states: We engage in spiritual and corporal works of mercy so that justice and peace, freedom and human dignity may prevail. Sister Anne O’Brien was a faithful, compassionate Sister of St. Joseph, whom I believe not only read this passage from our Constitution, but was consciously aware of its mission and acted steadily, motivated towards its fulfillment.

Upon her entrance into the Congregation on September 8, 1939, Sister Garnet, the name given to Anne at the reception of the habit, began her ministry as a Sister of St. Joseph as an elementary and high school teacher even becoming a principal. This was a ministry she greatly loved. It was not only because it placed her in contact with many students, but empowered her to use her academic and instructional skills to inspire the youth in her care. These years within the Catholic schools also gave Anne the opportunity to reside in convents with many sisters, some of whom are present here this morning. Sisters have shared stories of the happiness they experienced living in community with Anne (Sister Garnet). She was a woman who radiated life with her cheerful demeanor, gentleness and generosity.  Her smile was always her greeting! I personally was affected by Anne’s smile each time I visited her in her room.

During her years of teaching at Cathedral Anne kept abreast of changes and transitions occurring within the inner city. She became concerned with the turbulent days of racial tension that were emerging. Sisters of St. Joseph missioned in the city with Anne were collaborating with religious woman of various congregations in their determination to better serve the people there. For Anne, this was the dear neighbor! Ann joined the Urban Catholic Sisters, an organization that endeavored to assist the marginalized people of the inner city. This group stretched Ann beyond the classroom and into the neighborhood and conditions of family life.

It was during this time that Ann became a pioneer with other Sisters of St. Joseph. They moved from traditional convent living to an inner city project. There, they became one –dwelling amidst the dear neighbor of the South End! Perhaps it was her experiences in the inner city, and mingling with immigrant, poor families that Sister Ann deepened her awareness for the need of added assistance to God’s people. She embarked on a sabbatical seeking theological nourishment, knowledge, and guidance to the path that God was calling to her. Consequently Ann became one of the first Sisters of St. Joseph to become a parish minister at St. John Chrysostom Parish, a parish without a Catholic school. Sister Ann’s pursuit of courses at Emmanuel College ultimately led her to accept a position as Director of Religious Education at St. Jeremiah Parish, and later as a pastoral minister at Blessed Sacrament Parish in Walpole. Parishioners in all these parishes speak of Sister Ann’s wisdom and guidance for their family. Anne’s openness and constructive responses were welcomed by the parishioners when they approached her with their needs and concerns.

Ann’s work ethic, life style, gentle personality and compelling convictions were focused on serving God in a pastoral manner, spreading the CSJ charism into her ministry. In all of her ministries Ann was committed to Jesus’ gospel and gave witnessed to the values of justice and peace.  Her ability to risk and vision shaped her entire being.

St. Paul writes to the Romans,“We, though many, are one body in Christ, and individually members ofone another”. In reviewing the life of Sister Anne O’ Brien, these words seem to have been her manner of being.

Ann recognized the time to finish her active apostolic ministry. She transitioned from active parish ministry to local community living in Dedham. There she enjoyed daily life with the sisters, her friends and colleagues. She enjoyed reflecting with them, sharing her thoughts and future dreams for women religious in the church, city and world.

In 2000, Ann began her residence on Bethany Road, first residing at Fontbonne Hall, and then moving to here to Bethany. During her life Ann often suffered physical pain which caused her some disability.   It was at Bethany that medical attention and care could be provided for her.

Sister Anne O’Brien’s seventy-seven years of religious life as a Sister of St. Joseph has been filled to overflowing. Her ability to cope with her life was due to her profound prayer life. Ann accepted with gratitude the gifts of God’s grace, and she was always alert to God’s pathways for her. She delighted in relationships and collaboration with others utilizing their individual gifts and talents as a force for the welfare of the dear neighbor. Ann knew God’s call to serve the cause of right; she took God’s hand and allowed God to form her. God therefore appointed her a covenant with the people she served. Thus we can say Ann lived the message of Isaiah chapter 42 verse 6.

Born into a large family, one of nine children, Ann loved being with her family and her siblings, their children and her cousins. All were greatly loved by Ann. And of course, she was extremely proud of her sister, Mary, who followed her into the Congregation and became known to us as Sister Marinus.

As Sisters of St. Joseph we thank God for the gift of Sister Anne O’Brien – Sister Garnet – in our lives. Let us now rejoice with Anne that she is experiencing the ultimate relationship, eternal life and happiness with her loving God.