Sisters of St. Joseph of BostonPress ReleasesAug. 18 From “Ladylike Deportment” to the 100th Anniversary of Women’s Suffrage

From “Ladylike Deportment” to the 100th Anniversary of Women’s Suffrage 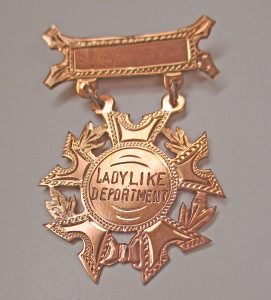 In 1928, this pin was awarded to Mount Saint Joseph Academy student Ellen Leddy for her “Ladylike Deportment”. Nowadays, this kind of award isn’t found at graduations or ceremonies.

What is “ladylike”, anyway?

We can certainly guess what this phrase meant in the 1920s. But what does it mean to be ladylike today?

On August 18th, we celebrate the 100th anniversary of the Nineteenth Amendment, which gave women the right to vote in the United States. This surely is a day to celebrate – after decades of protests, women won the right to formally make their voices heard.  “Ladylike” began to be redefined by women themselves. Since the 1920s, the Sisters of Saint Joseph have picked up where the suffragists left off to advocate for the diverse voices in the world.

Today, our society more publicly acknowledges that even the suffragist movement was not left untouched by racism. Despite the work of prominent Black women suffragists, their voices in the conversation of voting rights was often rejected in an attempt to gain the support of white voters. Leaving out women of color – not so ladylike. As Americans grapple with the role racism has played in our individual and collective history, the principles of Catholic Social Teaching point us in a positive direction.

We can look to the Sisters’ ministries as examples of inclusivity as they strive to bring every person’s voice to the table without distinction: the immigrant seeking citizenship or English literacy; the student in need of reading practice, whose parents work long hours; the senior citizen hoping for a community they can call home; women from all walks of life who are searching for a safe space of support.

Raising the voices of the marginalized is essential to achieving equality. The struggle for a voice in government for all Americans was not completed in 1920; our yearning for social justice continues today. We still need voices of inclusivity, like those of the Sisters of Saint Joseph, to be heard – and the the age-old adage still rings true:  A woman’s work is never done.