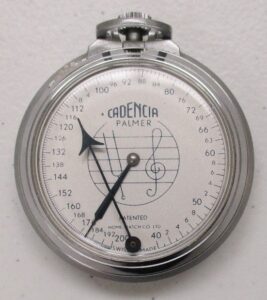 It’s summer time, which means that the Brighton Farmers Market is back up and running, and live music has returned to the park. Seeing people gathered on the green enjoying the sounds of the band got me thinking about a particular item in our collection: a pocket metronome belonging to Sister Blanche Dolan, CSJ. Foregoing the triangular shape of the typical metronome, this one is modeled after a pocket watch (hence the name), with the hand in the middle determining the beats per minute, and the hand at the bottom keeping time. The small size of the metronome and its accompanying stand make it convenient for travel. Such a device would be invaluable for the busy musician, and few musicians were busier than Sister Blanche Dolan. 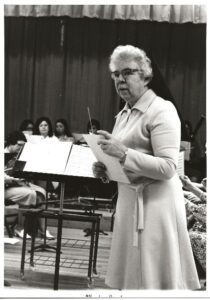 Sister Blanche (1905 – 1995) was a multi-instrumentalist who over the years became proficient in, and taught lessons for, the clarinet, trombone, trumpet, bassoon, and her first love, the violin. Initially studying under a graduate of the New England Conservatory, she began taking lessons from Sister St. Flavia Collins, CSJ, while a student at St. Thomas Aquinas in Jamaica Plain. Sister St. Flavia invited her to perform with the Mount St. Joseph Academy Orchestra, and brought her into the congregational orchestra after taking her vows. Sister Blanche was later tasked with reviving both orchestras in the 1960s, and was the director of both for many years.

Her music ministry didn’t end at the orchestra pit, however. She received a Bachelor’s degree in Music from Nazareth College, and a Master’s in Music Education from the University of Notre Dame (her Master’s thesis is available to read in the archives). Over the years she taught music in parochial schools at St. Ann in Dorchester, St. Mary in Brookline, Gate of Heaven in South Boston, as well as at Marian High School in Framingham and Matignon High School in Cambridge. She travelled to Europe multiple times, often behind the Iron Curtain, taking in the music culture at music centers, conservatories, and concerts. In a 1987 oral history interview, she explained she was “interested in the music of Russia; I was interested in their folk music, in the different types of instruments.”1 This experience broadened her horizons, and thus the horizons of those she taught.