We Remember Her
In the opening of the buds and
in the rebirth of spring, 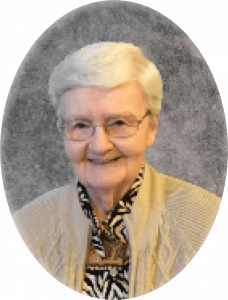 Catherine Mary Meade was a diligent, inspirational, and innovative scholar her whole life. She was devoted to her family and friends. Her nieces and nephew remember her as a “fun aunt”, taking them on long walks along the beach, undoubtedly sharing her wisdom with them as they looked for shells and pretty stones. They have great memories of swimming and laughing with Catherine.

In the later years of Catherine’s life, her nieces and nephew became the devoted ones, as Catherine had once been devoted to them growing up.

Eileen Mary was born to John and Mary Meade who were born in County Clare, Ireland. Eileen was the youngest child in the Meade family. She grew up in Dorchester with her siblings, Mary, Peter, and Cathleen. How she loved her family. After graduating from Mount St. Joseph Academy in 1946, she entered the Sisters of St. Joseph.

At her profession, she was given her religious name Catherine Mary.

After Vatican II, when religious women could return to their Baptismal names, her aunt insisted she keep the name “Catherine” because it was a beautiful and strong name.  And so, she did!

When she left the Novitiate, Catherine ventured into the world of teaching at the elementary and junior high levels. Her students remember her as always kind, fair, compassionate, and caring deeply for each one of them. Her first assignment was St. Thomas, Jamaica Plain, then St. John’s, Winthrop, St. Mary’s, Stoughton, and St. Mary’s, Brookline. All the while, she was teaching and studying at the same time.

After her studies in higher education, she began her long (40 plus years) ministry at Regis College in the History Department. She soon became the chairperson of that department as well as a Student Advisor. She was well known for her creative curriculum development and collaborative teaching. She introduced Museum Studies into the History Department. Catherine, along with other faculty members, became immersed in women’s history. She believed, for women, the path to equality stretched far ahead, and the journey had only begun.

Catherine will live on in our hearts forever.

When you go outside at night and look up at the stars and remember the promise of God: Those who teach and lead others will shine like bright stars for all eternity. Rest in peace, Catherine.

At Sr. Maura’s funeral, I said, Sr. Maura was our family’s one claim to Sainthood. Eileen grabbed me before we were out of the building, “Our one claim ???” In retrospect, she might have been campaigning for our Helen, Sr. Ernestine. She was Eileen, Big Eileen. Sister Catherine Mary, Professor Sister Catherine Meade, and most lovingly, AUNT EILEEN.

She was the fourth child of John J. Meade of Milltown Malbay, County Clare, Ireland, and Mary Frances Shine of Lis Robin, County Cork, Ireland. She was preceded by her brother Peter, Buddy, Mae, Sister Maura, and her sister Cathleen, justifiably proud mother of Mary Ellen, Chrissy, Martha and John.

Eileen was born less than a decade after the Congress passed the 19th amendment giving women the right to vote. Lucky for them!!! Eileen loved her sisters. She adored her brother, Buddy! Cathleen married Dick Cote, one of the finest men I have ever known, who drove Eileen and Mae, Aunt Katie and Aunt Nora hither, dither, and yon, and back again.

Eileen was a toddler when her mother died in childbirth. John, her father, was left with four young children to bring up. Stepping into that breach, thank God, was Aunt Katie, a combination of teacher, friend, advocate, cheerleader, fairy godmother, and matriarch. When I first wrote this I said Aunt Katie had a monumental influence on Big Eileen, but the truth is, she had a monumental influence on all of us.

Aunt Eileen, Big Eileen, is remembered so fondly as she hosted the family at the beach, often assisted by her dear friend, Edwina Hughes. She was a FUN AUNT and cousin. She loved the water, the pool at Regis, and the beach. She truly loved the beach. She loved the beach especially when you were there with her. A perfect example of Eileen in the water is when she invited Chrissy to swim with her at ‘the new pool” at Regis. They spent two hours in the pool, swimming, floating, talking until their fingers and toes were like prunes! Eileen was a very good listener.  She was fiercely proud of Regis College. What the college was and what it was becoming.  She loved the students and the faculty.

I hosted a talk show on WBZ radio. One weekend Eileen and I were talking, and she disagreed with something I had said to a caller. The caller said that God had given Paul Tsongas cancer because He was unhappy with his political positions. I responded that my Dad had just died of cancer and asked the caller what did he think God was trying to tell my dad? For a moment I thought I was dealing with The Godfather rather than my godmother as she told me emphatically, “Don’t tell them too much about the family!” Some talk shows begin with the announcement, “The opinions expressed on this show do not necessarily reflect the opinions of management or ownership.”  After a brief discussion she suggested that I have an announcement at the start of my show, “None of this has been cleared by his Godmother.” I told her she could do a talk show. She had more opinions than anyone in the family! But I know I’m not the only one who remembers her as always being on our side.

She wrote two books about St. Catherine of Siena. You can see why she was so taken by St. Catherine, an incredibly strong woman who had little difficulty telling a priest or a Pope what they were doing wrong! Before going to Italy, Eileen studied Catherine of Siena. When she come back from Siena she told me that after spending time with the people of Siena she felt that she knew Catherine. We could all take St Catherine’s words to heart, “Be who God meant you to be  and you will set the world on fire”

Given by Peter Meade, Cousin of Sister Catherine Mary Meade