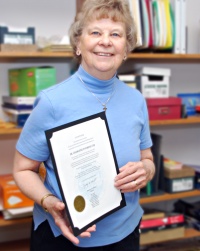 The city citation reads: “The City of Lowell in the Commonwealth of Massachusetts hereby offers its sincere gratitude and congratulations to Sister Charlene Favreau for earning the Teacher of the Year Award for 2014.” Sister Charlene has had an immeasurable impact on the lives of the children of Immaculate Conception School in Lowell, through her outstanding dedication to education and leadership abilities. Sister Charlene is a great role model not only to her students, but also her fellow educators”. Additionally, a certificate from the Commonwealth of Massachusetts, the House of Representatives, reads as follows: “Be it hereby known to all that: The Massachusetts House of Representatives offers its sincerest congratulations to Sister Charlene Favreau in recognition of her Wisdom, Compassion, Leadership, and Dedication to the Art of Education in the Ecumenical Community. Congratulations on being nominated as the 2014 Teacher of the Year.Charlene states, “I was greatly humbled to be so affirmed by the teachers, staff, parents, students, the City of Lowell, and the Commonwealth of Massachusetts.”