Sisters of St. Joseph of BostonPress ReleasesDec. 3: Sisters Witness at the White House 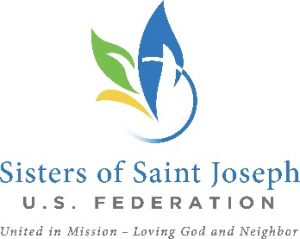 SISTERS OF ST. JOSEPH AND PARTNERS
PROCLAIM OUTSIDE THE WHITE HOUSE:
END THE MISUSE OF TITLE 42!

December 3, 2021: Nearly 30 Sisters of St. Joseph, associates, and partners in mission from around the country joined NETWORK and other faith-based and secular immigrant rights groups Friday morning to call on the Biden Administration to end the misuse of Title 42.

Title 42 expels migrants arriving at the southern border without any due process and in violation of their legal right to claim asylum. The public health clause — initially enacted by the Trump Administration during the COVID-19 pandemic — remains in place by the Biden Administration today. The immoral use of Title 42 denies the God-given, inherent human dignity of our migrant siblings and the basic right to seek asylum protected under international law.

The day’s event featured stories from the U.S.–Mexico border and a prayerful demand to Catholic President Joseph Biden to end the immoral use of Title 42. Those gathered outside the White House included a sister representing the Congregation of St. Joseph; 5 sisters from St. Louis; 16 sisters and associates from Philadelphia; and 7 sisters and high school students from New York.

Sister of St. Joseph Janet Kinney (Brentwood) — an attendee at the event — said the deplorable conditions she witnessed firsthand at the border compelled her to be present today. “It is a travesty,” Sr. Janet said, “I am here today to pray and act for justice for our immigrant friends who deserve our support.”

Santiago, a Honduran migrant living in Mexico for the past 11 years, shared at the public witness how Title 42 affects his family. Earlier this year, the violence became worse near his home, so his family “had to make the very difficult decision to migrate.” When he and his younger son went to the border for a way to request asylum, the immigration agents told him “the border is closed.”

Today’s public witness in Washington D.C. calls on all members of the U.S. Federation of the Sisters of St. Joseph – sisters, associates, partners in mission – to call on the White House to immediately end the misuse of Title 42.

The event was organized by NETWORK, the national Catholic social justice lobby, and included testimony from migrants and immigration coalitions Haiti Bridge Alliance, and Welcome With Dignity.

This event was live-streamed and is now available on YouTube at
WATCH THE RECORDING & TAKE ACTION
Note: The first half-hour shows participants walking around the White House to Lafayette Park.
The actual prayers and witness talks begin at about the half-hour mark.