In the opening of the buds and in the rebirth of spring. 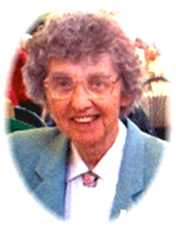 “We engage in spiritual and corporal works of mercy, so that justice and peace, freedom and dignity may prevail”.

I can’t imagine Sister Dorothy McKenzie knowing these specific words as she witnessed her older sister, Agnes, whom we knew as Sister Paschalita, enter our Congregation. But I do believe that Dorothy absorbed these words of our Constitution within herself after she entered our Congregation on September 81947. Truly, anyone who knew Sister John Regis – Sister Dorothy McKenzie- for the past 69 years, observed her not only as a Sister of St. Joseph, but a prayerful, religious woman who dedicated her life to our CSJ mission of service to the dear neighbor.

From her earliest assignments at local archdiocesan high schools, to her long tenure as a Professor at Regis College, to her transitions to GED teacher, then becoming the parish secretary at St. Ann University Parish, Dorothy’s service to respond to the current needs of the church never ended. One example was to join the Congregation Immigration Committee, pledging to involve herself in immigration reform and being actively engaged to assist those in need. In a letter to alert the Committee in 2014, Dorothy wrote as a resident of St. Joseph Hall “I have had ongoing involvement with an immigrant family from Sierra Leone, Africa, tutoring the mother in basic arithmetic, setting up her apartment to welcome her two immigrating sons and obtaining school supplies for the boys to attend school, all in collaboration with others.”

For many of us, and particularly the Sisters at St. Joseph Hall, we were observers and recipients of multiple kind acts from Sister Dorothy that ranged from hospitality gestures to even being escorted by public transportation into Boston for trips to museums and places we expressed to her a desire to visit.

In a letter to her niece, Jane, Dorothy said,” I have had a wonderful life with family, friends, Congregation. I have enjoyed my work in all its forms. I have seen many beautiful places and works of art, and heard glorious music – and I am deeply grateful”.

With such appreciation for the life that God granted to her, Dorothy, being her own person, did not forget to express how she was to leave us. To this end, she planned directives for her funeral and selected the readings and music for her funeral Mass. Realizing that Dorothy might  express in a letter her concern if something was array, her niece, Jane and I have attempted to satisfy every request given to us.

The readings in today’s liturgy speak to us of Sister Dorothy McKenzie and her trust in her loving God. Choosing a reference from the book of Jeremiah who speaks of God’s plans for us, Dorothy definitely heard and followed God’s invitation for her to pursue works of justice and peace. St. Paul’s letter to the Romans defines the qualities of a servant of God… I know Dorothy would blush at this … but I believe she had these qualities… zeal, service, acts of mercy, genuine love. And St. John’s Gospel… telling us not to be troubled…have faith in God… To me this Gospel in the passage Dorothy chose, was her message to us… trust in God, follow God’s path, God is the way, the truth and will give (us abundant)  life.

Sister Dorothy’s life for the past few months has been a great challenge for her. However, in all of her limitations, she made us, her visitors, feel honored to be in her presence. She greeted all who visited her with a smile, welcoming us, listening to what we had to say and attempting so often to answer with a word or small facial gesture. Without recognizing it, Sister Dorothy McKenzie elicited to all of us, a woman, teeming with belief in the love of God for her, aware of God’s presence within and around her, and overflowing with inner certitude that at some time, she will be dwelling in the house of the Lord.

So now, as Sister Dorothy McKenzie – Sister John Regis has been called so quietly and quickly from our midst, to the place prepared by her God, we give thanks as a Congregation for her many years of service to the dear neighbor as educator, mentor, and caring Sister of St. Joseph. We express our gratitude to the McKenzie family, for not only did you give us Sister Dorothy, but you also gave us your other Aunt, Sister Paschalita. May God and St. St. Joseph now welcome Sister Dorothy to her heavenly home.