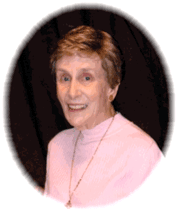 We gather in faith this morning to celebrate the life of Sister Dorothy Arlene Welch.

Eighty-six years ago, Dorothy was given as gift to Bill and May Welch; to her brother, Tommy and sisters, Frances and Marie.

Tommy taught Dorothy to read. Frances taught Dorothy her prayers. And Marie was the one she copied as when Marie would be doing her schoolwork, Dorothy would copy whatever it might be. (E.g. printing her name.)

Dorothy cried when eventually she was too young to belong to Marie’s Club. Then her Mother would take her aside and comfort her. In hearing the stories of her early years, I was reminded of Saint and Doctor of the Church, Therese of Lisieux.

Surrounded by a loving family with close ties of siblings.

She loved remembering the stories of her early family life about PAPA Dolan and of her Mother and Father dancing in the kitchen.   I came to realize that it was her experience of her family life that shaped her truest self. “I remember a day”, Dorothy wrote, “when I was a young girl, maybe 6 or 7 years old, there was a lot going on and I had that God-Moment.”

She told me another story of being four years old and saying: “I can do it!” That phrase I realized, marked all her days. She never hesitated whether it was hitting a golf ball for the first time OR preparing the most creative beautiful prayer service for the opening of our CSJ Chapter.

Dorothy would just give it her all. And it was always outstanding. She loved the Community and generously gave her gifts in service wherever she could.

We met at the Aquinas Junior College, (Newton) where we taught in adjoining classrooms. They were wonderful years, both in school and in Maria convent.

Dorothy was the Pied Piper with all the students.

We put on the musical, HAIR one year. It was the ‘Dawning of the age of Aquinas.‘ It was the beginning of our long friendship with each other, our families and many of your families.

The second half of Dorothy’s life began in 1975 when she began studies at Weston Jesuit School of Theology, which was in Harvard Square and coincidentally, I was in Matignon HS, so we lived together for those 3 years.  Dorothy was the first CSJ to receive a Master of Divinity. (The degree required for ordination).

The course work was demanding. She took class notes in shorthand and typed them in the evening.  They were rich years for both of us. Dorothy was, a “true daughter of Ignatius” and focused on being a person dedicated to the greater honor and glory of God. Ad Majorem Dei Gloriam AMDG, the Jesuit Motto.

Upon receiving her MDiv. her life moved into parish ministry (5 yrs.) Dorothy loved to teach but she told me many times what she loved best was doing Communion calls.

It was 1983 when she had lung surgery and was diagnosed with a lung condition that was fatal.

Bishop All Hughes came late one evening to the hospital and at that anointing, Dorothy asked God for more time. (And Jesus gave her 33+ years. The same number of years he walked on this earth). It occurred to me, as Jesus was the human face of God to people of his time, Dorothy was the human face of Jesus to many of us.

Following that surgery, I invited her to recuperate at our Montessori School  convent in Haverhill where she assisted the Principal with typing, etc. It was here that she met a young married woman who was studying Theology at Merrimack College, Joanne Fantini, whom she took under her wing and mentored, and who became a dear friend to both of us along with her four now grown children. (Her Son and married daughter are our gift-bearers).

Dorothy, tender-hearted, colorful, strong on the truth as she saw it. Memory that was amazing, She was deeply intuitive with a warmth that endeared her to everyone who sought her out for spiritual direction.

Poet/Artist/Lover with a delightful sense of humor.

Most everyone here today has experienced Dorothy as Kind, Loving, Generous and Affirming.  Dorothy said the greatest power we have, is to affirm one another. Knowledgeable in a variety of areas – Sports/ Literature/Theology/Scripture /Spirituality.

She was intelligent, an excellent Administrator, and true to her Zodiac sign of Leo the lion, born to lead.

Last week, I learned she was in the Activity room and a sister was having a coughing spell. Dorothy saw S. Maureen, our Vice President, and summoned her and said: “Get her to the Doctor” and S. Maureen said “Dorothy, I can’t do that. The Nurse does that.” Dorothy replied “You can do it. Do it.”

Wherever she was Dorothy created community, the gas station, the food store, strangers on the street.

She was always welcoming people into her world and into their own best selves.

Above all, dedicated, committed to the one Mission, the Mission of Jesus.

Eventually she gave up driving and continued to see some for direction  at home in Roslindale and went faithfully to the group in Needham.’the lovely women of Needham’ (as she named them) One evening a month someone would pick her up and bring her home around 9:00pm. She loved this even when it seemed too much. Another group she went to were the ‘Lovely Women of Walpole’ (the wow group) and both groups are here today. Thank you for your visits and cards.

Finally, two years ago, her lung condition necessitated her coming to Bethany.

She came on a Friday and on Sunday, her sister, Marie, whom we had visited weekly for 8 1/2 years, died. The final chapter of her life was beginning.

She received many accolades along the way, none of which she rested in.  (Deacon’s letter from CT/ recent retreatant/Good Friday)

Dorothy wanted to see Gloucester one more time. On Monday of her final week, Joanne and I drove to Gloucester with Dorothy, As we sat in the dining room eating lobster, she connected with all the feelings she had known there.

Her life, like Jesus’ own, was gathered up in the Triduum of Friday to Sunday. When she could no longer do the Mission, it was time to return to her Creator. And God again answered her prayer.

On Friday she was having difficulty breathing and the mass on her lung was causing pain in her back.

And we had our last laugh. She spoke about “moving forward.”

I said to her, “To Jesus, now is the time.” We began to pray and I read to her the first reading of todays Mass (Song of Songs 2:10-16a) and she said “beautiful”.  Joanne came from Gloucester Saturday morning and when she told Dorothy that she loved her, Dorothy said, “How much?” By Saturday afternoon she wasn’t responding. She remained comfortable through the night and on Sunday soldiered on, very comfortable. We listened to the Mass and I sang “This is the day the Lord has made, let us rejoice and be glad.” I reminded her it was Mother’s day and Marie had died on a Sunday.  She was prayed for at Mass. After lunch, some Sisters from our days at Aquinas were standing at the door and I invited them in. We were remembering some fun times at AJC when suddenly, her condition worsened. Without a single sound, she was gone.

The Lion-hearted had left like the Lamb. They were always. one.

(Later, I remembered it was a moment reminiscent of her first God-moment when she was 6 or 7 years old) She had once written:“to be with God in the wonder of quiet and presence! Also, in the joy of a happy crowd.”)

I believe, God took her breath into God’s own and she just stopped breathing.

Friendship is a gift and as  Scripture (Sirach 6:14-17) tells us, a “sturdy shelter”. It is a mystery that I think is related to always ‘pointing to the other’ which is ( like God looking to give and not get.)

Like Rublev’s icon of the Trinity that Dorothy loved, each one looking to the other.

Dorothy prayed and lived in that icon all her days in Roslindale and in her rooms at Bethany. Now she has  joined them for eternity.

In 1972 Dorothy wrote these lines for a Memorial card:

She entered the deep waters of

A perpetual springtime was hers

–and in giving to all.

We have known and we have loved

Given by S. Carol Fitzsimmons, CSJ