Sisters of St. Joseph of BostonPress ReleasesEly Castro Rosales to Speak at the Sisters of Saint Joseph Motherhouse on Honduran Crisis 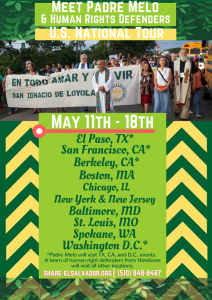 BOSTON/CAMBRIDGE, Mass. — May 02, 2018 —Ely Castro Rosales, commentator on human rights with independent Honduran radio station Radio Progreso, will speak in Boston May 11 – 15 on the ongoing human rights crisis, lawlessness, corruption and violence that continue to roil the region and drive thousands to flee for asylum in Mexico and the U.S.

The Honduran delegates — staff members of Radio Progreso, human rights defenders and victims of violence and suppression in their country — will fan out across the U.S., speaking in Boston, the San Francisco Bay Area, California, Chicago, Illinois, Houston, Texas, Spokane Washington, St. Louis, Missouri, El Paso, Texas, Baltimore, Maryland, and ending May 17 and 18 in Washington, D.C.
The delegation is calling for an end to U.S. military support for their government, which gained power through elections widely viewed as fraudulent. They hope to raise U.S. awareness of the growing repression, violence and human rights crisis in the country, exacerbated by the affirmation given by the U.S. government to the November re-election of President Juan Orlando Hernández, despite widespread allegations of fraud.

Castro Rosales, Father Moreno and Radio Progreso staff have received death threats for their public actions and broadcasts reporting on conditions in Honduras.

Honduras is presently viewed as one of the most dangerous places globally for human rights advocates, LGBT individuals, journalists and environmentalists.

Delegation in the midst of U.S. decision on Honduran TPS
The group’s U.S. tour is slated to the backdrop of President Donald Trump’s final decision expected Friday (May 4) to extend or end the Temporary Protection Status (TPS) in this country of some 57,000 Hondurans — and the administration’s actions in stalling entry for an estimated 200 Central American asylum seekers who arrived from a caravan Sunday April 29 at the San Ysidro port of entry between Tijuana, Mexico and San Diego, California.

The Greater Boston delegation events are organized by Centro Presente, a Massachusetts Latin American immigration organization, human rights organization the Unitarian Universalist Service Committee, the Unitarian Universalist College of Social Justice, and by some Associates of the Sisters of St. Joseph of Boston, Brighton, the Boston Church of the Covenant and Church of the Covenant Mission and Advocacy Committee, Jamaica Plain.