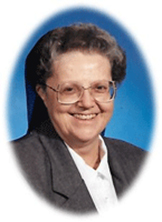 In the first reading of today’s liturgy, taken from the book of Ecclesiastes, we will hear: “There is a time for everything and a season for every purpose under heaven”. I think these words, coupled with those of Psalm 27, “Lord, I long to see your face”, were integral to the prayer of Ronayne Powers, Sister James Frances, especially during these last few months.

On September 8, 1951, a young woman, Margaret Ronayne Powers, moved by the Spirit, attentive and responsive to God’s call, said YES to the invitation and the mysteriously powerful grace working within her and embarked on a lifelong journey as Sisters of Saint Joseph. She willingly chose, as the psalmist said, to keep her heart open and free, to make time to dwell in silence and to become a peaceful presence in this world.

The words written by the Pastor of her home parish, St Catherine, Somerville, stated: “It is a pleasant duty to write a recommendation for Ronanye Powers to be a candidate for your wonderful order….  I hope and pray that God will give her the means of persevering in her vocation. “And God did for 65 years….There is a time for everything under the heaven….

The seeds of Ronayne’s vocation were sown and nurtured in her by her parents, who taught her the importance of love of God, love of family, and love of the “dear neighbor”. Although Ronayne was young when both her parents died, she had the wonderful benefit of having many first cousins who became her treasured family and friends.

It was during these years of great personal loss, while a student at St. Clement High School, that Ronayne met and was greatly influenced by her teacher, Sister Alan, (Claire Browne). Over the years, their bonds of friendship grew. They shared a common call as Sisters of Saint Joseph of Boston and eventually ministered together at Saint Joseph Manor, Dorchester and at Cardinal Spellman High School, Brockton….There is a time and a season for every purpose under heaven.

For many years, S. James Frances created a warm, caring atmosphere in the various convents to which she was assigned. You have heard the saying, the kitchen is the heart of the home. Well, I think it was true in James Frances’ case for she provided that heartfelt atmosphere for the many sisters with whom she shared community life, not only because of the fantastic culinary repasts she created but because of the person she was and attributes she possessed. Ronayne was prayerful, witty, kind, welcoming, gentle and grateful, spirit filled, quiet, organized, having a willing listening ear, able to offer advice, or provide a word of encouragement. These same attributes exemplified in her earlier years continued to manifest themselves in the various other ministries in which Sister James Frances engaged. In her own quiet, patient way, she demonstrated that strength and gentleness, spoken of by St. Francis deSales, when he wrote: “There is nothing as strong as gentleness and nothing so gentle as real strength”…..There is a time for everything, a season to plant and a season to harvest.

The word taken from our CSJ Constitution, noted on the cover of this liturgical booklet, ”Moved by the Spirit we become attentive to God’s will and love”, motivated Sister James Frances together with S. Claire, her dear friend and mentor, to embark on a new journey, a new ministry at St. Joseph’s Manor, Dorchester. There, Ronayne had the opportunity of extending herself in service to the dear neighbor, the residents who were ill and/or aged. At the Manor she made a significant difference in the lives of those to whom she ministered, and in the lives of their families. After many years of ministerial service to the residence at the Manor, it was with a heavy heart, yet openness to God’s will that Ronayne discerned her next step on her journey, terminating her ministry at the Manor and accepting the invitation to join the community at Cardinal Spellman, Brockton….There is a time to keep and a time to cast away.

Upon hearing this news, Bishop Hughes wrote: “Recently I have learned that you will be leaving Dorchester to go to the convent at Cardinal Spellman High School, Brockton. I would like to take this opportunity to express my great appreciation for the extraordinary service that you have rendered over these years at the old and new St. Joseph’s.

I have been told of the extraordinary effort that you made to facilitate the challenging transition of a few years ago.  The efforts you made to place each resident was extraordinary. Your fidelity to both religious life and the work that you undertook in the Lord’s name is a source of great inspiration to me.”

Sister James Frances loved her time at Spellman, but once again, after many years of service to the Brockton community, it was determined that the Spellman convent be closed and James Frances along with other Sisters, moved to her new home at St. Joseph Hall, Framingham. Recognizing her own declining health, she chose, with courage, openness and grace, her next transition, Bethany Health Care Center.

Throughout her 65 years in community, James Frances lived the mission and charism of a Sister of St. Joseph, trusting that God was at work in her. Ever mindful of doing God’s will with joy, she shared so generously the gift of herself.  Ronayne faithfully lived out her baptismal commitment through her vowed life as a Sister of Saint Joseph, and, as God’s chosen one, became the instrument through which God’s word touched the hearts of so many.  She was unwavering in her faithfulness, gentle and patient in her loving service, and firm in her belief that God’s grace was sufficient for her.

Yes, there is a time for everything and a season for every purpose under heaven… Ronayne, Sister James Frances we are grateful for the gift of your life among us and rejoice with you knowing that you now experience what you longed for, to see God’s face and to share in the fullness of life in God’s loving presence.