Sisters of St. Joseph of BostonPress ReleasesJeanmarie Gribaudo, CSJ, Coordinates Woods for Others at BC

Reprinted with Permission from
The Heights for a Greater Boston BC 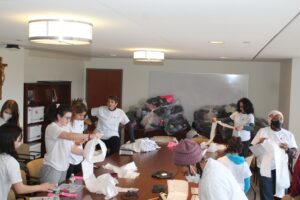 The Woods College of Advancing Studies’ new service-learning program—Woods For Others—aims to enhance the student experience, according to Jeanmarie Gribaudo, CSJ. “We’re trying to give the folks that go to Woods … the sort of frosting on the cake that you get in BC when you’re a traditional undergrad with the sense of community,” said Gribaudo, who coordinates the program.

According to Gribaudo, there are two main components to the program: days of service and service-learning. Similar to PULSE, a Boston College service-learning program for undergraduates, Gribaudo said Woods For Others will offer courses starting in the fall that give students the opportunity to serve their community while reflecting on their work in a classroom setting.

“Woods is interesting because it’s a non-traditional population unlike BC,” Gribaudo said. “These students go to school at night, and they work during the day, and some of them are coming in after having a hiatus with school. So it’s a fabulous program, and it’s really, in many ways, the original mission of BC to work with students that need a different way of being.” 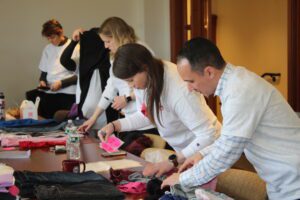 On Feb. 19, Woods For Others held its first day of service at the St. Mary’s chapel on campus with Cradles to Crayons, a non-profit organization that provides homeless and low-income children with essential resources such as clothing.

“It was an awesome … first service day and an awesome experience,” said Christine Bortolotto, a member of the Woods For Others advisory board and WCAS ’25. “Students in the Woods College are of all ages—so a traditional freshman in college all the way up to a grandmother was with us.”

Woods College Dean Karen Muncaster said the school established the program to give students an opportunity to live by BC’s motto of being “men and women for others.”

“They don’t have the same opportunities to do PULSE or other service-learning projects that are offered to other undergraduates from MCAS or CSOM or Lynch,” Muncaster said. “So that was the original premise … to be able to give our students … an opportunity to meet each other and form community outside of class and an opportunity to do service learning.”

Aisling Walsh, another member of the Woods For Others advisory board and WCAS ’22, said the program has allowed her to connect with more of her peers. “I’ve met a lot of new people of different ages and perspectives, and that has been really awesome—just being able to meet other people in that community,” Walsh said. “It helps me kind of feel like I’m getting more of that normal college experience.” 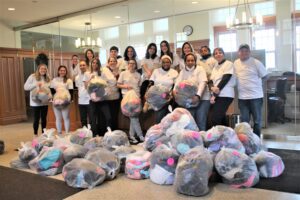 Bortolotto also highlighted the relationships she has built through the program so far.  “This semester, I’m actually in class with a few of the people that are on the advisory board so that’s even a nicer connection,” Bortolotto said. “So it’s been really nice building relationships and making connections.”

According to Gribaudo, Woods For Others is also the first service-learning program for a non-traditional educational program, such as the Woods College, in the country.  “They’ve had some different iterations of it, but not in a real formal way connected with the class,” Gribaudo said. “So I’m hoping that that will take off, and I just felt that more than anything that Woods students will feel like … coming together, being together, meeting other people from Woods.”