Sisters of St. Joseph of BostonPress ReleasesJuly 4: The Globe Monocycle, Its Patent Coin and CSJ Archives: What’s the connection?

Invention of the Globe Monocycle
and how its Patent Coin exists in the CSJ Archives. 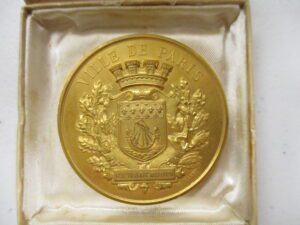 “Be it known that I, John T. Quealy, of… Connecticut, have invented
certain new and useful Improvements in Monocycles…”

This bright gold patent coin from the Boston CSJ Archives was awarded to John Thomas Quealy by the Academie Parisienne des inventeurs industriels et exposants. Quealy was awarded the coin for his  invention of the Globe Monocycle in May of 1892.

How did it get to the CSJ Archives?
John T. Quealy was an Irish immigrant and the father of Sr. Alfred Quealy, CSJ (1884-1962), who likely inherited the patent coin. Sr. Alfred taught at eight different parochial schools in the Boston area and served as Principal at St. Clement in Somerville and St. Columbkille in Brighton. 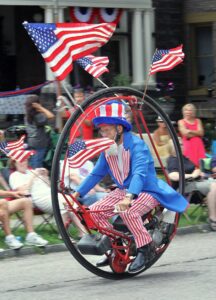 The monocycle is a vehicle that requires its rider to sit within the wheel which moves it forward, rather than on top of the wheel as seen in a unicycle. Like other American inventors, Quealy applied for a patent for his invention through the U.S. Trademark  and Patent Office. Official patent documents detail his plans, which he drew up to improve upon earlier monocycle designs by other inventors. It appears his  plans add additional support to the main wheel for better balance while riding—so that the monocycle is less like a coin and more like a globe. 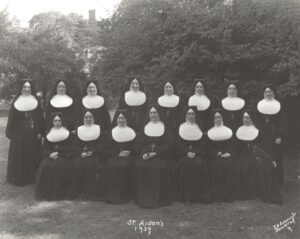 Images:
Top: Patent Coin for the Invention of the Globe Monocycle in 1892
Middle right: A modern-day monocycle makes an  appearance at a July 4th parade. (“A monowheel rider in the 2011 Doo Dah Parade, Columbus, Ohio” by Postdlf is licensed under CC BY-SA 3.0 and can be found at https://en.wikipedia.org/wiki/Monowheel#/media/File:Columbus,_Ohio_Doo_Dah_Parade-2011_07_04_IMG_0161.JPG.)
Bottom:  Sisters living at the convent at St. Aiden, Brookline in 1939. Sr. Alfred Quealy stands in the top row, second in from the right. From Sisters of St. Joseph Archives