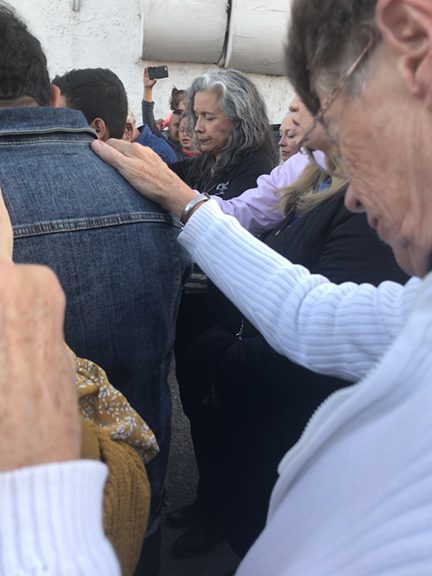 During part of the communal blessing of those gathered, Maryann Enright, CSJ, places her hand on the shoulder of an asylum seeker at a three-day teach-in titled “Journey for Justice” hosted by Hope Border Institute.

Immigration impacts women and children deeply since they comprise more than half of undocumented people in the United States.

Because of this and the hardship they endure, immigration reform needs a strong family reunification component so that mothers and children will not be separated.

We, the U.S. Federation of the Sisters of St. Joseph Leadership Council, compelled by the Gospel and by our heritage to be responsive to the “dear neighbor” without distinction, call on the President and the U.S. Congress to enact immigration policy that is both just and comprehensive. We believe that this policy must include:

August 2019: U.S. Federation Resolves to Create Communion at the Intersection of Racism, Migration, and Climate Crisis

Since our founding in 1650, the Sisters of St. Joseph have responded to the needs of the times, creating communion in a
disconnected world. Today, as we live out our mission of unifying love for the healing and trans formation of the world, we are heartbroken by the myriad ways our one human family and Earth, our common home, suffer from disconnection, indifference, violence and fear in the face of racism, migration, and climate crisis.

Oct. 2018 U.S. Federation Calls for the Welcome and Humane Treatment of Arriving Migrants

U.S. Federation of the Sisters of St Joseph aligns with the Leadership Conference of Women Religious (LCWR) in opposing the current administration’s continued denigration of those fleeing untenable situations in their home countries through an executive order which will block those seeking asylum in the U.S.

Sept. 2018 U.S. Federation Calls for the Protection of Immigrants

The U.S. Federation of the Sisters of St. Joseph, join with the Leadership Conference of Women Religious (LCWR) in strongly opposing the U.S. Department of Homeland Security’s proposed changes to the public charge regulation. We view such changes as yet another attempt by the Trump administration to restrict immigration and punish immigrant families, to force parents to make impossible choices between the well-being of their families and the prospect of future citizenship.