From September 1, the World Day of Prayer for Creation, through October 4, the Feast of St. Francis of Assisi, major Christian churches throughout the world celebrate the “Season of Creation,” a time of prayer, advocacy and action on behalf of Creation.

The theme this year is “Jubilee for the Earth.” A time of jubilee is intended to be a time of rest, recovery and restoration.  Humans need this, but so does the Earth. Certainly during this time of COVID-19, we have experienced the interconnectedness between our usual lifestyles and aspects of them that harm the earth. The pandemic has also laid bare the inequalities that exist in our economy and health care systems. So the goal of the organizers of this year’s Season of Creation is to engage us in reflection on Earth’s need for Jubilee, and in advocacy and actions to restore right relationships between the Earth and its inhabitants. We need to attend to this work of restoring balance on the personal, communal, national and global levels.

For more information on the Season of Creation, including prayers, suggestions for action, and areas for advocacy, see https://seasonofcreation.org/ 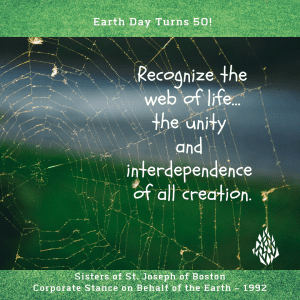 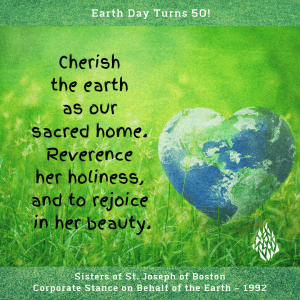 We, the Sisters of Saint Joseph of Boston and Associates – as individuals, as local communities, as Congregation, as peoples of the earth, in the spirit of our charism of unity and reconciliation, call ourselves to transformation of our relationship with the earth and all creation.

Joining together in the struggle to live out this call, we commit ourselves:

As Catholic communities, organizations, and institutions in the United States, we join with state, tribal, and local governments, as well as businesses, financial institutions, and other faith organizations, to declare that we are still in on actions that meet the climate goals outlined in the Paris Agreement. U. S. Catholic Climate Declaration