The recent increase in global, national and local violence, especially gun violence, has called for a response from concerned citizens and groups. Much of the violence has been caused by racial hatred and intolerance.  In addition to holding a peace vigil in the face of this violence, we Sisters of St. Joseph have joined the voices of numerous organizations in condemning it, and lobbied our legislators for gun reform.

October 24th 2020 marked the 75th anniversary of the founding of the United Nations. To recognize the occasion, LCWR joined Pax Christi International in a statement calling on UN member states to renew their commitment for an enhanced UN system by: 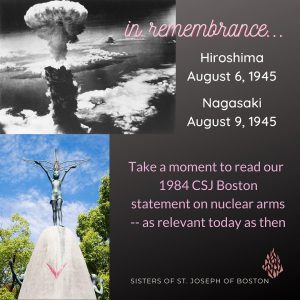 On August 6 and 9, 2020, we marked 75 years since the United States conducted nuclear attacks against the cities of Hiroshima and Nagasaki, devastating their populations and destroying their infrastructure. The production and testing of nuclear weapons in the United States and internationally continues to harm the health, environment, and cultures of communities around the world.

Send a message to your Members of Congress, asking them to renew the New START Treaty, set to expire in 2021.  This is an important treaty limiting possession of nuclear weapons by the U.S. and Russia.

As Sisters of St. Joseph, we share in the communal heartbreak of our nation in the face of unthinkable violence. The recent mass shootings in our country impel us to once again demand that all citizens and elected leaders end the rage and division that all too often results in mass, indiscriminate violence. 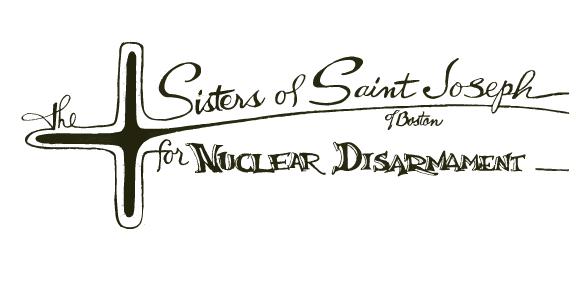 The first corporate stance taken by the Sisters of St. Joseph of Boston is specifically entitled “On Nuclear Arms.” While this focus continues to address a clear and present global issue, the statement itself focuses more broadly on peacemaking in its varied dimensions (as in the selection below), and on reconciliation. Our charism of unity and reconciliation is manifested in nonviolence and peacemaking, in seeking justice for the poor and marginalized, and in advocacy for systemic change.

We, the women of the Congregation of the Sisters of Saint Joseph of Boston, take this stand regarding nuclear arms:

We resolve, then, not from fear of death, but from love of life, to focus our energies more intensely on peace-making:

By the grace of God we determine