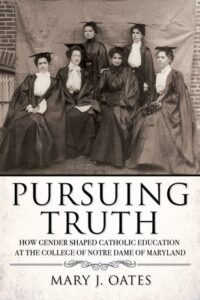 From the beginning, Pursuing Truth by Mary J. Oates engages the reader in the awareness that this is a story that needs to be told. The book focuses on the experiences of the College of Notre Dame of Maryland (now Notre Dame of Maryland University) that in 1899 became the first Catholic college in America to award the four-year baccalaureate degree to women. Noting that women’s social status and professional roles incontestably remain among society’s leading issues. Oates analyzes how Catholic higher education for women over the last century contributed critical impetus to the issue.

It doesn’t take long for the reader to realize that this fascinating story belongs to all of us. Pursuing Truth offers and intensive analysis of how members of the Congregation of the School Sisters of Notre Dame responded to challenges to their plans for a Catholic college for women. These challenges came from all sectors of society, from ecclesiastical leaders, national and state government agencies, mainstream educational organizations, as well as segments of the Catholic laity. Changing social mores, wars, economic depression, racial and class tensions, and the rising popularity of coeducation over the twentieth century presented severe problems for the young college. Nonetheless, other religious sisterhoods followed the Maryland sisters’ example, and Catholic colleges for women quickly became familiar institutions across the landscape of twentieth-century America

In Pursuing Truth, Mary J. Oates offers fascinating critical analyses of “how women became agents in their own right as citizens of society and the nation’s largest church.” This book is a significant contribution to the history of higher education for women in America. It is highly recommended.