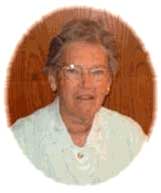 We gather this morning to honor and celebrate the life of Sister Margaret Ada Lowell, Sister Gertrude Marie. One of the requests that Peggy made when she planned this celebration was that I was to keep my remarks “brief, humorous, light” and in parenthesis, “smile”. I’m not going to take the request “to smile” personally because Peggy prepared her funeral many years ago.

It is not difficult for me to smile when talking about Peggy because whenever I think about her it brings a smile to my face. Over the past week as many Sisters and friends of Peggy shared some of their memories with me, I learned some things I didn’t know about her. I knew Peggy was an avid Red Sox fan but baseball was the only professional sport she loved.  She was not to be called “Margaret” but “Peggy”. It was something she was adamant about. You have now heard the name Margaret spoken for the last time by me.

The first reading in this morning’s Liturgy is taken from the Prophet Jeremiah. I can imagine God saying to Peggy I have called you by name (I am sure God called her Peggy), I know the plans I have for you. Peggy was always open to God’s plan for her. She responded to God’s call to religious life and after 25 years as a teacher, Peggy was receptive to the next ministerial plan that God had for her. In the late 1970’s and early 80’s Peggy was trained and certified as a Pastoral Associate in the Archdiocese even though it wasn’t a traditional role  for women religious at that time. Peggy knew that her God would provide a future full of hope for her and for the people she would bring God’s love and hope to at St. Agnes Parish, Arlington, where she is still remembered for her dedicated ministry, and to the parishioners of Star of the Sea Parish, Squantum. Peggy trusted in God’s plan for her and lived her life confident of God’s loving care.

Written next to Peggy’s selection of today’s second reading from Colossians she wrote. “virtues for me to practice”. As we listen to the this reading today I think you will agree that the virtues of sincere compassion , kindness, patience and gentleness, are virtues Peggy lived and shared, by word and example, with everyone she met.

In 1994 Peggy was honored by her alma mater, Mount Saint Joseph Academy as a Woman of Excellence.  Peggy was recognized as a Women of Excellence for dedicated service in ministering to the many different needs of many different people.  The Samaritan woman in today’s Gospel couldn’t believe that Jesus, a Jew, would ask her for a drink since Jews had nothing to do with Samaritans.  The gift of living water that Jesus gave to the woman and the gifts of hope and love that Peggy gave to all to whom she ministered quenched the spiritual thirst of many. Peggy lived well the charism of the Sisters of St. Joseph, “connecting both neighbor with neighbor and neighbor with God”.

Memories are gifts. In the very act of remembering we can often find ourselves smiling.  Peggy’s cousin, Nancy, will now share a reflection on behalf of Peggy’s family, Nancy, Clyde, Bridget and Nicole.

We pray in gratitude for the life of Sister Peggy Lowell and we rejoice with her that she now celebrates her new life in the presence of the One who said “I have called you by your name,  you are mine”.

Given by:  Patricia E. McCarthy, CSJ