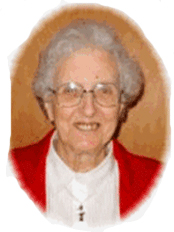 “We see relationship as the heart of mission,

and thus we seek to become ever more united

in the mind and heart of Christ Jesus.”

We gather here this morning to give thanks for the life of Sister Margaret Mary Sheehan, Sister Vianney. For almost 77 years Sister Margaret embodied the words of our Constitution “We see relationship as the heart of mission, and thus we seek to become ever more united in the mind and heart of Christ Jesus.”

On August 4th, a week before Sister Margaret died, the Church celebrated the feast of St. John Vianney, Sister Margaret’s Patron Saint. Other than knowing that he is the patron Saint of priests and also known as the Cure’ of Ars, I was curious about St. John Vianney. Consider now for a moment, John Vianney, priest, pastor, confessor and Saint. Early in his life he was befriended by a local priest, Father Bally. That relationship transformed John Vianney’s life by bringing him closer to God. Their relationship was God- centered, powered by the Spirit. Once ordained, John Vianney was sent to Ars. He set out to “pastor” his people by getting to know them well. He entered into a more Christ-like relationship with all those who crossed his path. As years passed by and his ministry deepened, his relationship with his people centered on the encounter between priest and penitent in the confessional. This compassionate power of relationship was a great grace to many who came to Ars to seek him out. His relationship to Jesus Christ sustained him. The love between him and his Lord gave him the power to love his people with the heart of Christ Jesus.

I am in no way trying to portray Sister Margaret as another John Vianney, her patron Saint, but as a devout Sister of Saint Joseph, Margaret took seriously the words of our CSJ Constitution printed on the cover of our worship aid. Throughout Margaret’s ministerial life, as educator, administrator, ESL tutor and hospital pastoral care minister, her relationship with Jesus sustained her. This pastoral relationship was a grace received by all to whom Margaret ministered.

In an article that Margaret wrote for Soundings in 1979 she wrote “our growth in the love of God and in our neighbor will increase aided by God’s grace to the extent that each of us earnestly strive to surrender daily “to become more united in the mind and heart of Christ Jesus and to foster growth in one another.”  It is clear to me that this quote from our Constitution was a motivating force in Margaret’s life as a Sister of St. Joseph.

Upon hearing of Sister Margaret’s death, it was overheard here at Bethany that Sister Margaret “aged with grace”. In Joan Chittister’s book The Gift of Years – Growing Old Gracefully   it is written, “Age comes to the truly blessed…if we are willing to let go of the life we have planned, so as to have the life that is waiting for us.” To quote a line from today’s second reading from Romans and today’s Gospel from St. John, Margaret believed that “having died with Christ she would also live with Christ” (Romans 6:8) … “in the dwelling place that has been prepared for her for all eternity.”(John 14:3) Margaret has let go of her planned life in order to have eternal life which has been waiting for her.

Sister Margaret requested that there be no reflection or sharing of memories at her funeral. Perhaps you’ve heard the saying “it’s easier to ask for pardon than to ask permission” so now I’m asking Margaret’s forgiveness as I ask you to join with me during Margaret’s funeral Liturgy and in the days ahead to reflect on her very long life, her love of God, her love of the Congregation and her family, as we listened to today’s readings and sing the hymns which Margaret chose for her funeral Liturgy.