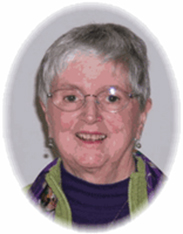 Every time there was a funeral here at Bethany each one of us Area Councilors would find a message from Sister Marie Cicchese on our telephone when we returned to our offices telling us what a wonderful “job” we did. From what I have heard these past few days, the telephone was the manner through which Sister Marie would reach out from her room in Bethany, to affirm, question, and give messages to people for something specific that was on her mind.

My personal acquaintance with Sister Marie Cicchese has been short term. However, for the past two and a half years as her Area Counselor it has been my privilege to have had the opportunity for personal conversations with Marie, sharing ideas, and listening to her dreams for the Congregation as well as for the Church. It was through these visits that I also became aware of her creativity and talents, particularly in writing. Last year Marie had been asked by the Mission Advancement Office to create a verse for bookmarks that were distributed to our benefactors. She delighted in doing this task. Often she would read her thoughts for the upcoming bookmark to me, and explain the rationale behind her wording. Marie delighted in showing me the finished card, often commenting on the skill of the Sister artist who had illustrated the verses.

As I reflected on the life of Sister Marie Cicchese as a Sister of St. Joseph this past week, the words of our Constitution-Spirit and Purpose were brought to mind: “Our growth in Christ is characterized by a share in His life, death, and resurrection…which results in fullness of life for us and for others”. Marie Cicchese succeeded in fulfilling her life for herself and for other.

From the dayof her entrance into the Congregation in September 1950, Marie Cicchese embraced the spirit of the Congregation as she ministered as Sister Louise Mary teaching junior high students at the outset of her ministerial career. After obtaining a Master’s Degree from Boston College and additional academic enrichment from Tufts and Harvard Universities, Sister Marie embraced the profession of a college educator. Her last years of ministry – thirty in all – were spent at Regis College. There she bonded with faculty members and the Sisters, especially in the “pit” and other convent places, as she embraced each day educating the students in her Regis classes. She inspired and mentored them towards excellence. ‘Graduates speak of Sister Marie as an amazing woman who inspired and challenge thousands of Regis women through the years. One student declared, “You tolerated nothing but the best from me. As a result, I was forced to achieve. In the end I was left feeling confident because I knew that I had excelled. Without your pressure, I could have become settled; instead, I proudly graduated with honors”

Even though her prayer life brought her close to God, I wonder if Sister Marie Cicchese had any idea of what God was going to ask of her in her later life. Her youth was so vibrant and energetic. However in her later years, life changed, as she was stricken with Parkinson’s disease, one that continued to debilitate her, leaving her incapacitated and vulnerable. Yet in this struggle, Marie’s closeness to her loving God became manifest. Not only did she strive for fullness in her life, but she became more aware of the conditions and the issues in life of those beyond her Bethany room.

Her sister, Rosella, Fr. Pat and I became aware of Marie’s faith in the preparations she made for her Funeral Mass this morning. Her choice of Isaiah 43 – with a message that states no matter what, “You shall not be consumed.” And indeed she wasn’t! Eloquently interpreting the Mandala for the LCWR which is printed on this liturgical booklet, creating Psalm 2013 for Bethany, where she praised God, and also requested to be printed on the cover of the booklet. The letter of recommendation for Ro Campbell, her Bethany nurse, for Nurses’ Week, which accorded her notoriety from the Boston Globe, all are examples of Sister Marie’s talent as a gifted writer.    Each piece of artistry articulated who Sister Marie Cicchese was. Perhaps during those many days sitting in her chair in her room, Sister Marie heard the words of St. Paul to the Romans: “…whatever you have to go through now is less than nothing compared to what the magnificent future God has planned for us”.

Marie was very conscious of her anticipation towards eternal life. In the last few weeks she reached out to those she dearly loved particularly her beloved sister, Rosella, and Fr. Pat McLaughlin, who each have companioned Marie with compassion, dedication and visible presence throughout her life. And there are others, some present here this morning, who now treasure memories of telephone calls, conversations, ministry, music concerts on the third floor of Bethany, celebrations and memorial gifts given and shared with Marie.

But now, Sister Marie Cicchese is speaking to us, using Jesus’ words from today’s Gospel: “I am going to my Father, and you’re Father, to my God and your God.

May you, Sister Marie Cicchese, rest in the peace God has prepared for you.   We, the Sisters of St. Joseph of Boston, celebrate your 66 years of life amongst us as a religious woman of the church.