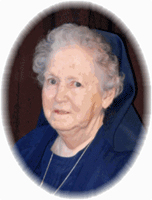 “Do not let your hearts be troubled.  Have faith in God.” These words from St. John’s Gospel leaped out at me as I was preparing this funeral liturgy for Sister Marie Michael. This was the passage that she had chosen as the Gospel for her funeral Mass.

For Sister Marie Michael, it was a heart troubling time in her life that our lives intertwined.

Because of declining health it was my role as Area Councilor to discern with Sister regarding her need for more medical assistance, and the necessity for her to move from St. Joseph Hall to Bethany Health Care Center.  Although difficult for her, I know it was only because of her strong faith in God that she was able to accept this challenge, and adjust to her new environment in Bethany. In those early days as she adjusted to her surroundings, Sister and I had many conversations. We observed that we both loved the color blue, and that we both had great devotion to Our Blessed Mother. I would often get a big smile from Sister Marie when I saw her wearing blue clothing. I would tell her that she was wearing Blessed Mother Mary blue!

The words from our CSJ Constitution portray that, “the Sister of St. Joseph moves always toward the profound love of God and love of neighbor without distinction.” I wonder if Sister Marie Michael ever envisioned that when she – Margaret Mary Ward – entered the Congregation on September 8, 1949 as a young woman of 25, from the small town of Hopkinton, leaving at home her parents and six siblings, to begin her ministry as a Sister of St. Joseph, did she ever imagine where her life would take her.  Beginning as a teacher in Archdiocesan elementary schools, then attending Boston University classes in Special Education and Speech Pathology, this education would eventually lead to a twenty five year teaching career in the Aphasic department at the Boston School for Deaf and Aphasic Children. I have heard from some of her colleagues at the School that Sister Marie Michael was an incredible teacher there. Some say that it was her unique individuality that resonated with her students, and enabled them to learn communication and language skills. These in turn developed the students’ self-esteem and assisted them in their future career pursuits and daily living.
However, it was in 1985 that Sister Marie Michael left BSD and moved to Fontbonne Hall. There she began her new ministry as the driver to the Sisters who were in residence there.

Although a very private person Sister Marie Michael did give us some insight into her spiritual life.  Her choice of readings and hymns for today’s Mass offer us a glimpse of the spirituality that flowed within her. The selection of the 43rd chapter of Isaiah reveals that Sister Marie understood in great depth God’s call to her, giving her an honored place in God’s sight. I imagine Sister Marie Michael “saw the new heaven and the new earth” described in the book of Revelation as the sacred place that God was offering to her, particularly during these past few months as her health was diminishing.

However, as with all of us, Sister Marie Michael did have some preferences in her life – one of which was to be in quiet stillness. Her special place here in the Bethany chapel was the last row in the back of the chapel. There she felt peace and could pray her rosary. She also delighted in attending Mass and praying for those she loved.

For the Sisters who lived with Sister Marie Michael, and her colleagues and friends, they all knew the dearly beloved in her life were her family. She delighted in visits to their homes and attendance at family functions. Every family member waited for Marnie to appear, whether it was for a celebration or to sit at the bedside of someone who was ill. As many have witnessed here at Bethany, her family – nieces and nephews did reciprocate in their attention to her. It was remarkable that in the stillness of the early hours of last Thursday morning, when Sister Marie Michael accepted God’s invitation to eternal life, some of her nieces and nephews were with her!

We the Sisters of St. Joseph give thanks for the gift of Sister Marie Michael Ward’s life in our Congregation for the past 67 years. We rejoice that Sister now celebrates her new life in the presence of her loving God.

Sister Marie Michael – may you now know the joy of eternal peace with God.