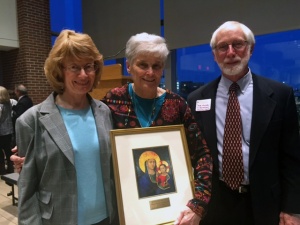 Sister Marie Therese Martin, CSJ, was one of four people who received the Madonna Della Strada Award in a ceremony held April 10 2016, at Boston College High School in Dorchester.

The award, presented by the Ignatian Volunteer Corps (IVC), honors lives that reflect the values of direct service to the poor and of working and educating for a more just society. It is the IVC’s highest honor.

Thirty-three years ago, Sister Marie, a St. Joseph of Boston, was invited by the Sisters of St. Joseph of Springfield to work at Abby House/Worcester Connection. Later, she also worked for the Campaign for Human Development, as a Parish Associate at Blessed Sacrament Parish, and as Director of Pastoral Care and Mission at St. Mary Health Care. Marie is currently Pastoral Associate at Our Lady of the Angels Parish, Worcester, and hospice chaplain at Holy Trinity Hospice, Worcester.

Sister Marie served on the IVC New England Planning Committee and helped envision Casserly House, a ministry of the Sisters of St. Joseph of Boston, in the Roslindale neighborhood of Boston.

The IVC was founded in 1995 by Jesuit Father Jim Conroy, and the late Jesuit Father Charlie Costello in response to the desire of mature adults who seek avenues to minister to the poor with spirituality in accordance with the vision of the Second Vatican Council.