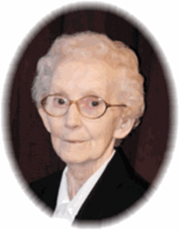 We see relationship at the heart of mission and thus we seek to become ever more united in the mind and heart of Christ Jesus.  CSJ Constitution

Rita Theresa Harrigan no doubt pledged these words in her heart even though they had not been scripted when she entered the Congregation in 1945. Since her entrance into our Congregation Sister Marilyn Harrigan has been recognized as a person who did regard relationships very central during her life as a Sister of St. Joseph.

Relationship – giving of herself to others – began at the outset within her family with whom she shared life with, her parents, her sisters and presently with their children and their families.

Since her death on December 30th many have spoken of Sister Marilyn as a tranquil woman. Although shy by nature, she could be characterized as truly a gentle woman.  No matter where she lived, or what her CSJ ministry, or the assignment she was given, Sister Marilyn easily established relationships with the sisters and indeed with those with whom she ministered. Sisters have reminisced about Sister Marilyn, particularly about her years at the Motherhouse teaching and guiding two of our young employees, Maureen and Brett, how to perform their jobs in the kitchen and dining room. As Sister Marilyn worked in the Dining Room they were often peeking in to see her and delighted in listening to her reassuring words to them. It was because of the skills Sister Marilyn imparted to Maureen and Brett, that they would later be hired to work in the kitchen at Fontbonne Convent.

A perfect description of Sister Marilyn came from one of her students who was very impressed with her as a teacher. Being a person who revered her own education, and concern for providing educational help opportunities to the poor, this woman instituted a scholarship in 1988 at Our Lady of Perpetual Help School in Cartego, Columbia, in Sister Marilyn’s honor.  She described Sister Marilyn as an “Irish colleen who still has a touch of strawberry blonde in her hair, a twinkle in her eyes and quiet warmth that reaches out to anyone around.”  I am sure that Sister Marilyn would cringe from that description but we know that those words capture a picture of the woman we praise today – Sister Marilyn Harrigan.

Throughout her many years of ministry, primarily as a teacher in both the elementary and secondary levels of Catholic education, Sister Marilyn displayed virtues that St. Paul listed in his letter to the Colossians…kindness, humility, gentleness and patience. The virtue of wisdom was encouraged by St. Paul to be included in teaching and advising others. This was a counterpart to Sister Marilyn’s proficiency in the field of education.

Being evermore united in the mind and heart of Christ Jesus another phrase from our Constitution was perhaps an axiom that Sister Marilyn adopted.  We know she was a prayerful woman. It was not unusual to visit Marilyn in her room here in Bethany and see her sitting in her chair saying the Rosary.  Sometimes her eyes were closed, maybe because she was reflecting on one of the mysteries of the Rosary or perhaps she was listening in her heart to God’s words from the book of Deuteronomy, “I take delight in you” During the past years while  Marilyn was instructing her students or serving others in her past ministries she  felt great trust  because she heard God‘s voice from Deuteronomy whisper to  her, “My voice is in your mouth and heart, so  you can do it”.

In her seventy years as a Sister of St. Joseph Sister Marilyn Harrigan “put on love”. For a petite, humble woman who dedicated her life to loving God and to the service of God’s people, Sister Marilyn was motivated toward the needs of the dear neighbor without distinction. She quietly supported them and empowered each person to concentrate on the goal God had desired them to achieve.

As unassuming and introverted as Sister Marilyn was, her kindhearted, empathetic manner was recognized by many during her lifetime.   I believe Sister Marilyn is presently being rewarded by God.

Sister Marilyn ate the bread from heaven. She is now experiencing God’s promise of eternal life forever, and will also be remembered in our hearts.

Sister Marilyn we celebrate you and give thanks for your life as a Sister of St. Joseph. You truly lived the words from our Constitution – We strive in every aspect of our lives to be for others a visible sign of God’s active and inclusive love.