We Remember Her in the rustling of the Leaves and in the beauty of Autumn. 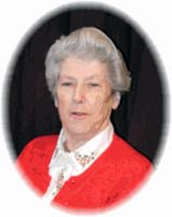 On the cover of the booklet is a picture of one of the coastlines of Ireland. This picture seemed appropriate as we gather this morning to celebrate the life of Sister Mary Lydon, who was born in Galway, Ireland. Even though she has lived in the United States for many years she loved her homeland dearly. God called Sister Mary suddenly from us. This was a deep shock not only for us, but also for her family. Being in this chapel this morning is a twist of fate because Sister Mary Lydon, each morning, was always one of the first Sisters in this chapel saying her rosary, always sitting in the back row.

Our vocations come from God to us in varied ways. Sister Mary probably learned about women religious from observing them in their ministries during her early years in Ireland. Upon arriving in the United States, apparently Mary continued to be interested in religious life. She was attracted to the Sisters of St. Joseph of Boston. So, on September 8, 1954, Mary entered our Congregation becoming a member of the “Party of 1954”, receiving the habit and beginning her early ministry as Sister Joseph Patrick.

Our Constitution states in part:” Our growth inChrist is characterized by a share in His life, death, and resurrection”. Throughout her 61 years as a Sister of St. Joseph, I believe that Sister Mary Lydon shared with Christ – life, death and resurrection within her own life.

Sister Mary experienced many ministries in giving food service to the Sisters with whom she lived at our various convents, servicing women in Quincy and Milton with her hairdressing skills, and giving home health care to her patients in Milton.

Losses from deaths within her family and relatives in Ireland and the United States, as well as unplanned transitions in ministry, and living community life generated great sadness for Sister Mary. However, being missioned to St. Joseph Hall and to Bethany Health Care Facility emitted adjustment changes for Sister Mary. It was here at Bethany and St. Joseph Hall and even at Bethany Hill School that provided for Sister Mary many opportunities for her unseen assistance to the many residents of these facilities.

While sitting at Sister Mary’s bedside, with Sisters who came into her room, to be with Mary and pray for her, that I had the opportunity to listen to stories about Sister Mary’s generosity of service, and kindnesses to them, as well as to other residents at Bethany. One Sister commented that eating in the dining room, and being in conversation with the Sisters at her table was important to Sister Mary. However, she did not waste time there. She felt she had to be present on the second floor by dinner time to help the nurses with the residents there. During these past days members of the Bethany Staff and others have also related stories to me. Each one seemed deeply touched by Sister Mary Lydon’s thoughtfulness and generosity.

The Prophet Jeremiah speaks of God blessing those who” put their trust in God as their hope.”  When the changes within her life occurred, I believe Sister Mary did just this.   She placed great trust in her God. As a private person, not many knew or understood Sister Mary’s actions.  One thing we did know, was her devotion to Our Lady of Knock, who was a very special person in her prayer life. Sister Mary also had great faith in the water from Our Lady of Knock, placing it on herself, as well giving bottles to others, whom she believed could benefit from its significance.

The Gospel from John chosen for Mary’s Funeral Mass expresses the trust that Mary experienced throughout her religious life as a Sister of St. Joseph. This Gospel speaks of living bread – bread that if eaten, gives eternal life.  The reception of Holy Communion was an important participatory action to Sister Mary Lydon. She seemed to comprehend the giftedness of being nourished by the Eucharist. It sustained her here on earth and she believed it would enable her toward eternal life and “raise her on the last day”.

For 61 years Sister Mary Lydon, (Sister Joseph Patrick) has been a Sister of St. Joseph of Boston.  For all the years of living as a Sister of St. Joseph, Sister Mary Lydon, in the words of St. Paul, has been “praising the Creator of our Savior Jesus Christ”, in her own way, believing, she was “redeemed and sins forgiven,” these bequests have been “blessings (to her)  from heaven”.

For some reason God did not want Sister Mary Lydon to have to wait too long for the invitation to eternal life.   As family, Sisters and friends, we were companions with Sister Mary Lydon   during her lifetime. So, this morning, we are now escorting her to her perpetual reward of peace with her God.

We, the Sisters of St. Joseph give thanks to God for Sister Mary Lydon, and ask our patron, St Joseph, to place his fatherly hand on her. May Our Lady of Knock welcome her to her heavenly home.