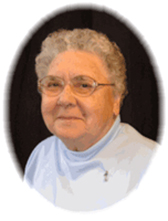 For the past few weeks I had the privilege of being with Sister Mary William during her recent illness, and since her death on Monday memories of her have been shared with me by several people. Their messages spoke of Mary Williams’s love for them and her generosity in fulfilling not only their needs but also their desires.

On the cover of the liturgical booklet is a sentence from our CSJ Constitution taken from the chapter on Community. “We see relationship at the heart of mission and thus we seek to become ever more united in the mind and heart of Christ Jesus.”

Jeanne Jarvis- Mary William was born into a large family that eventually totaled thirteen children.  From her earliest childhood, Mary began to interweave relationships into her life.  I am certain that her parents created the means and activities that not only united the family, but also developed strong bonds among the siblings, lasting until their deaths. Certainly we here at Bethany have witnessed the outpouring of love from Sister Mary William’s siblings’ children, with their constant visits to their Aunt AJ, during these past few weeks since Sister Mary William became so ill. I can only imagine that this same visiting scenario was witnessed by the sisters at the convents where Sister Mary William was missioned.

Entering the Congregation on September 8, 1949, these past 68 years as a Sister of St. Joseph, Mary William built relationships, and created environments that radiated the love and dedication of her ministry. Not only was her food preparation a delight to the sisters, but mostly cherished, was her gentle, loving spirit that greeted them each day upon entering the convent dining room for a meal.  The sisters residing at Fontbonne Hall were gratified with Sister Mary William’s attention to them as she tended to their physical needs, supporting the nurse, offering comfort and assistance. As one sister told me, Sister Mary William appeared  to know not only what a sister needed, but more often what they desired… be it a just baked hot cross bun  or a drive to the ocean!  That care for her residential “dear neighbors” empowered Sister Mary William to open a “supply room” at Fontbonne Hall and later when she began her residence at St. Joseph Hall. Living at St. Joseph Hall was wholesome contentment for Sister Mary William. Sitting in the dining room or being the clerk at the “store” gently distributing goods to the Sisters was a joy for her.

I remember Sister telling me this room was a “supply room” and not to call it a “store” because she did not charge the sisters a tax on the items they purchased and she didn’t want the room to cause any trouble for the Congregation!

Because Sister Mary William knew or became aware of particular items that enhanced the desires, or personal needs of the sisters, she often went out to the neighboring stores and malls herself to purchase particular brands and objects for the sisters. As a proprietor, Sister Mary William supplied the Sisters desires, enabling them to make purchases at a decent price.

In all of the years of her life, especially in her ministries, Sister Mary William, being a woman of humility and deep prayer, consistently demonstrated her belief in being loved and chosen by God. She manifested and was admired for the spiritual qualities mentioned in St. Paul’s letter to the Colossians, kindness, compassion, gentleness, and generosity. To those who ministered to Mary William in any manner, one could always here her words of gratitude to them.

Perhaps years ago, Jeanne Jarvis, Sister Mary William, read from the book of Deuteronomy God’s promise of a life, giving prosperity, if one followed God’s way.  Leaving her loving family, embracing a religious vocation, deepening her inner spirituality, and ministering to so many, Sister Mary William became aware of the additional promise from God’s blessing in the land you are entering. And so I believe, Sister Mary William is speaking to us all this morning, and most especially to her family whom she dearly loved, “Do not let your hearts be troubled … God has prepared a place for me”. Sister Mary William knew Jesus had a place for her as Jesus was her way, her truth and her life.

Henri Nowen, a Dutch spiritual writer, described what is means to be truly “beloved of God” as one’s life on earth appears to be ending. He raised the question, “Can we see our dying as a “new way for us to send our own and God’s spirit to those whom we loved and who have loved us”.  I think Sister Mary William Jarvis gave us this same message to us during these past few days of her life.

We, the Sisters of St. Joseph of Boston give thanks to the Jarvis family for the life of Sister Mary William for these past sixty eight years. We give thanks to a woman who lived her vocation as a Sister of St. Joseph of Boston, embodying a life of service to the dear neighbor without distinction.  So now, we pray: may Sister Mary William Jarvis be rewarded by our loving God grant and her rest and peace for all eternity.