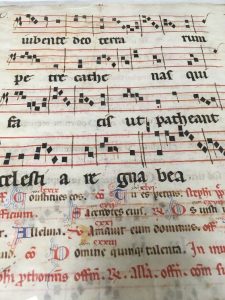 Detail of music in the manuscript

Inlaid with black, red, and azure ink, a large sheet of parchment paper in the Archives is stored with a note which claims it to be a medieval manuscript dating back between 1400 and 1460 A.D. If true, it is by far the oldest artifact in the Boston CSJ Archives. However, single-page leaflets from medieval manuscripts are notoriously tricky to trace both in origin and ownership. Fakes do exist!

At the very least, we can admire its potential: it is listed as a French missel, a book that contains readings, music, and prayers for liturgy. This one is said to have been used on All Saint’s Day, known as La Toussaint in France. The note describes it as a single page from an original book “probably obtained from some monastery in southern France”,  it was hand-printed using ink made from vegetables, before the printing press was invented.

But why would the Boston CSJ Archives have an artifact like this? The note tells us that context: it was gifted to the Sisters by an alumnus of the Boston School for the Deaf in 1966. Having taught so many students, the Sisters are often the grateful recipients of various gifts from their former students – some of them quite unique! It is difficult (and likely impossible) to confirm the accuracy of the note’s claim, but, nevertheless, the calligraphy seen here is a work of art- whether it was drawn in 1966 or in 1466. 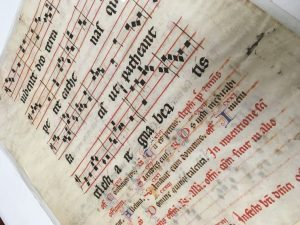 The manuscript is a single leaflet, page 109 and its verso, page 110 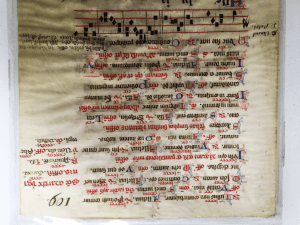