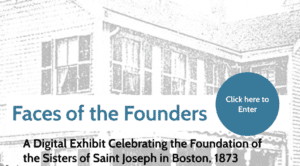 Faces of the CSJ Boston Founders
click the image or the title above for an interactive presentation of this anniversary
On all devices you can navigate by using the arrows at the bottom of this presentation.
When using a computer, you can also click the circles to advance the presentation. 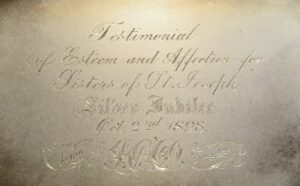 Jamaica Plain. The founding Sisters left their home in New York to serve a need in Boston: to provide faith-based education to the growing Catholic parishes in the Boston area. While not all people in the Boston area were appreciative of the establishment of parochial schools, the sentiment from the Catholic immigrant community which the Sisters served was that of a warm welcome. Margaret Higgins, once a student at St. Thomas Aquinas,[1] told of her father who owned a fish store in Jamaica Plain at the time of the Sisters’ arrival:

“My father was quite pleased – and everybody was in the parish – that the nuns were arriving. So every Friday after they arrived he would send down a large container of oysters and a container of clams…”[2]

Warm clam chowder and oyster stew marked the beginning of the Sisters’ ministry in Boston.

The above artifact is another gift to the Sisters: a rectangular plaque of silver. It was offered as a “Testimonial of Esteem and Affection for Sisters of St. Joseph”, on the occasion of their Silver Jubilee in 1898. Be it through silver or seafood, “Esteem and Affection” for the Sisters existed decades after their first arrival in the city.

On Founders’ Day, we celebrate not only the Boston foundation in 1873, but all that has happened in the one hundred and forty-seven years since, because of that day. A group of just four women, responding to a need, committed themselves entirely to their new mission and influenced Catholic culture and education in Boston for years to come.