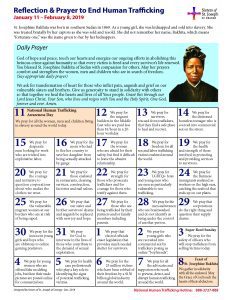 Included in this message is a “Reflection and Prayer” to End Human Trafficking. This prayer extends from January 11, 2019, which is Human Trafficking Awareness day, through February 8, 2019, the feast of St. Josephine Bakhita. We are grateful to the Sisters of St. Joseph of Orange, CA, who designed this calendar and offer it for the use of all.

Local Catholic Sisters representing several congregations in the Greater Boston area will gather on Sunday, January 13, 2019, from 1:00-2:00pm at 637 Cambridge St. Brighton, MA, to commemorate the tenth annual Human Trafficking Awareness Day. A resolution passed by the US Senate on June 22, 2007 has forever marked January 11th as a day of awareness and vigilance for the countless victims of Human Trafficking across the globe.

Human Trafficking is modern-day slavery. While many call it a hidden crime, it exits right here, right now in the Boston area. The goal of the Anti-Trafficking Coalition [ATC] is to raise awareness of the reality of human trafficking both locally and globally and to alert concerned people of good will about how individuals can make a difference in eradicating human trafficking.

The prayer vigil is free and open to the public.

We will gather in the Chapel of the Sisters of St. Joseph Motherhouse and proceed outside for the vigil.

The Boston Unit of the Leadership Conference of Women Religious includes sixteen Congregations representing women religious in the greater Boston area. Members of LCWR are Catholic women religious who are leaders of their orders in the United States. The conference has approximately 1300 members, who represent about 80 percent of the 49,000 women religious in the United States. The conference develops leadership, promotes collaboration within church and society, and serves as a voice for systemic change. Visit their website www.lcwr.org.

An estimated 850,000 people are trafficked annually worldwide, according to the U.S. State Department, 20,000 of them into the United States. Human trafficking forces men, women, and children into pornography, prostitution and other sexual exploitation, as well as labor exploitation. In 1998, the realization that trafficking was a growing problem around the world—and that it was being largely unaddressed—led to the formation of a, broad-based coalition of women’s organizations, faith-based groups, children’s groups, labor groups, and health groups. This bi-partisan coalition determined that they would do something about human trafficking. Together, they drafted and helped pass the U.S. Trafficking Victims Protection Act of 2000. The law provides a comprehensive approach to elimination of trafficking in persons through a three-pronged strategy—prevention, prosecution, and protection. In 2003 the U.S. Conference of Catholic Bishops/Migration and Refugee Services began educating segments of the public about the horrors of human trafficking. The effort will begin with members of women’s religious communities who have the potential to educate and influence others on behalf of victims of trafficking.