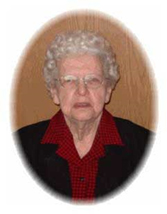 “The Sister of St. Joseph moves always toward the profound love of God and love of neighbor without distinction”. This statement from the Consensus Statement of our Constitution speaks of the life of Sister Romula Cullen. Personally for me, years ago, I remember Sister Romula coming to St. Matthew Convent with Sister Falisa, on a Saturday to pick up Sister Serena and Sister Georges for a special destination. This quartet was always together – on retreat, at Congregation events, vacation, or any activity that could be a reason for them to come together. For Sister Romula, these outings were a great joy for her, because she was seeing her beloved sister – Anna (Sister Serena). For me from my days at St. Matthew Convent  and as her Area Councilor, I came to know Sister Romula as  a Sister of St. Joseph who  seemed to be conscious of God’s love for her, as well as  be  a woman religious focused on distributing  that love to others… the neighbors with whom she came in contact.

Sister Romula was born – Josephine Anne on September 29, 1920 in the Winchester Hospital. And until her entrance into the Sisters of St. Joseph on September 8, 1941, Sister Romula was raised and educated in Winchester – a genuine Winchester girl! Sister Romula’s family was large in number – eight siblings, all of whom were loved and cared for by their parents. Perhaps this was a reason Sister could be such an affable personality possessing a great sense of humor.

On September 8, 1941, Josephine Cullen entered the Sisters of St. Joseph. We have known her for 73 years, as Sister Romula.  Her ministry as a Sister of St. Joseph was in the field of education. Beginning her career as an elementary teacher Sister Romula taught  in Somerville, Mattapan, South Boston and Lynn. With degrees earned  from Regis and Boston University, Sister initiated  her business teaching career at Catholic High Schools in and around the Boston area. In 1976 Sister Romula was hired as the Principal of Sacred Heart School in North Quincy. During her time at this  school, Sister Romula was praised for creating an atmosphere of openness and trust within the school environment, touching the lives of the Pastor, (who fondly loved her), the faculty and Parents. Her quiet yet determined manner contributed to the building of a Christian Community of faith in the school.

In the summer of 1983 Sister participated in a Summer Sabbatical in England called a Mathematical Journey. Sister Romula loved this workshop and wrote glowingly to Mother Catalina thanking her for the opportunity to attend this workshop. She was also so grateful to be given permission to go to England to attend the workshop. This was not an ordinary  destination for  study for a Sister of St. Joseph in 1983!!

Never a person to be idle, Sister Romula moved to Newton from Sacred Heart Quincy and became a member of the faculty at the Jackson School as their Librarian. In ministering there, Romula also experienced happiness in living  with the many Sisters in Maria Convent (some of whom are here this morning).

However, ill health came upon her, and in 2008, in order to receive the medical assistance she required, Bethany Health Care Center became Sister Romula’s new address. This was a difficult time for Sister Romula. However, as in her earlier years, Sister Romula knew she was cherished  by God. As St. Paul wrote in his letter to the  Ephesians, Romula had been “bestowed in Christ spiritual blessings”. These graces enabled her to accept the mystery of ill health that somehow had befallen her. Even though problematic for her at times, Sister Romula continued to attempt to undertake the daily life of Bethany, attending Mass, and social functions on her walker, with residents , staff and her family witnessing her health diminish. In her earlier days at Bethany Sister Romula was one of the best bowlers, and she never lost her taste for chocolate!

So it happened last Wednesday evening Sister Romula heard the words from the Song of Songs, “Arise, my love, and come away”. Sister Romula readily  heeded God’s invitation to enter her eternal home – be free of all illness, reunite with her family, especially Sister Serena and her dear friend, Sister Falisa, and experience God’s promised reward  for living a dedicated, ministerial life as a Sister of St. Joseph. Truly, Sister Romula Cullen lived out the words of our Constitution: “We strive in every aspect of our lives to be for others a visible sign of God’s active and inclusive love.”

May you, Sister Romula, rest in the peace God has prepared for you. We, the Sisters of St. Joseph of Boston, celebrate your life and thank you for your presence in our lives.

Given by: Gail Donahue, CSJ