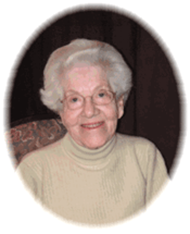 We seek relationship at the heart of our mission as Sisters of St. Joseph. This appears to be the approach Sister Rosenda possessed as a Sister of St. Joseph for the past 79 years– in the cities and towns of Massachusetts, where she ministered as a teacher, as well as in France, Italy and Beirut, Lebanon where she studied and resided. Not the typical experience of a Boston Sister of St. Joseph, but a reality that transported Sister Rosenda  toward a depth of knowledge and a deep passion for the  French language, culture and French customs.

Following in the footpath earlier chosen by her sister, Genevieve, whom we all knew in the Congregation as Sister Mercedes, Winifred Gill entered our Congregation in 1938, after her graduation from Regis College. Because she had received her degree in French from Regis, she was assigned to teach French at various high schools in the Boston Archdiocese. With a passion for the French language Sister Rosenda pursued her studies and even obtained a Fulbright Scholarship to study in Europe, a feat she spoke of not only as a privilege, but as an achievement. Throughout her additional European pursuits of knowledge Sister Rosenda adjusted herself to European cultures. She followed a lifestyle that broadened her vision and explored unfamiliar regions not experienced by other Sisters of St. Joseph of Boston. However, for those who lived with Sister Rosenda at Regis, her friends and family, being a Sister of St. Joseph of Boston was more significant to her in her role than the accumulation of her academic accomplishments.

Sister Rosenda planned her funeral and made sure – in her vocal classical manner – that Sister Susan Reilly deliver her requests to me. Her choice of readings gives us some understanding of the depth of this woman religious.  In her prayerful contemplation Sister Rosenda believed God indeed did have a life plan for her, that God would bless her with a future full of hope and prosperity. Reviewing Sister Rosenda’s 99 years of earthly living gives us proof of God’s promise to her and the realization of those words from the book of Jeremiah.

Throughout her life, and primarily during her religious life as a Sister of St. Joseph, Sister Rosenda attempted to emulate an attitude consistent with that of Christ Jesus. St. Paul expresses to the Philippians, Jesus accepted death…Sister Rosenda in her human life attempted to accept God’s will for her and follow the pathway God called her.

Five years ago I became Sister Rosenda’s Area Councilor. I was aware that she had been a professor at Regis College, and had spent time in Europe. I also had heard she was not only intellectually astute, but a notable teacher of French language and culture. At our first meeting Sister Rosenda and I shared stories of our past, our families, and our views on religious life today. After that encounter I always greeted Sister Rosenda with “Bonjour” and I immediately could see the twinkle in her eye when I said it. On other visits Sister spoke of coming to Bethany, an event she did not favor at first, but recognized quickly that this was a plan of blessing from God for her. For it was here at Bethany that Sister Rosenda could reunite with her sister, Mercedes, and share precious moments that she never dreamed would ever occur.

Upon retiring from Regis College Sister Mary Oates wrote in a tribute to Sister Rosenda, “You combine uniquely wit, erudition, and lucidity of expression, with kindness, and the result has been splendid learning.” This described Sister Rosenda as a professor / educator. But none of this would have been possible unless Sister Rosenda internalized her position as a branch on the sacred vine, producing fruit, providing intellectual knowledge and urging her students to present their best effort at all times in the search for truth.

For the past few years as she resided at Bethany Sister Rosenda was seen sitting in the first row of this chapel, having been pushed here in her wheelchair by her caretakers on the fourth floor. Her head was always held high. Her graciousness was given to all with her gentle smile. An assessment of Sister Rosenda’s life is now challenging us to be the person God desires us to be, and continuously remember that God is always at our side.