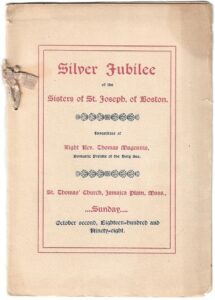 At the turn of next month, the Sisters of Saint Joseph celebrate their foundation in Boston 147 years ago. The Sisters were sought after by Rev. Thomas Magennis, founder of St. Thomas Aquinas Parish in Jamaica Plain, after he witnessed their teaching ministry in New York. In early October of 1873, Sr. Mary Regis Casserly and three other sisters answered the official call from Archbishop John Williams to serve the children of working-class immigrants.

The first classes took place in the basement of the church, with 200 girls enrolled. Boys were added in 1877, becoming the first co-educational parochial school in New England. Mother Mary Regis Casserly struggled against pressure to quickly fill teaching positions in the growing parochial schools, insisting her sister-teachers be professionally trained before entering the classroom. She collaborated with the Boston Normal School and Harvard University to provide training for the sisters so that their instructional methods and qualifications matched those in the successful public school system.

“The zeal and devotion of the nuns in guiding and administering the spiritual and educational needs of their pupils require no elaboration.  The success of their endeavors stands on its own record.”[1]

By 1898, the school was flourishing and the Sisters were celebrating 25 years in Boston, their Silver Jubilee. Archbishop Williams presided over the events, joined by the archdiocesan chancellor and reverends representing various local parochial schools and American universities. In the congregation were many of those who had a hand in the original foundation twenty-five years earlier.