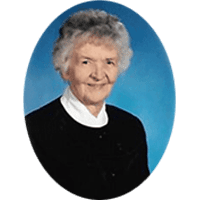 We remember her in the rustling of the leaves and in the beauty of autumn.

Sister Anne Kiely, previously Sr. Thomas More, was born 100 years ago in Philadelphia to James and Elizabeth Kiely. She grew up in Amesbury along with her brothers Charles, James and Philip, and her sister, Mary. Sister Anne, described by many as the “best teacher I ever had,” ministered at many schools in the Boston area, the longest being over 26 years at Fontbonne Academy in Milton.

For 79 years, Anne lived as a Sister of St. Joseph, embodying a joyful spirit, who accepted both people and life “as they are, and as it is,” respectively. In community life, she has been described as a safe place, one who engaged in intelligent discourse, while being playful at a moment’s notice. Anne and her dear friend, Sister Esther Redmond, initiated the first alumnae liturgy at Fontbonne Academy, desiring to bring people together as a community to remember those they loved and lost.

She was so proud of her family, who brought her so much joy. A sister recalls driving her home many years ago and seeing the excitement of her nieces and nephews who greeted her on the lawn – and Anne’s happiness at seeing them.

The readings that Anne chose for this day speak of a steadfast trust in God, the one who will wipe away our tears and destroy death forever, the one who prepares a place for us, who promises resurrection. Sister Anne’s life reflected this belief. Her attitude was to “go with the flow.” This is as it’s meant to be – not as despairing hopelessness – but as a peaceful acceptance. God would provide for what was needed as we accept life on life’s terms.

When I asked Anne a few weeks ago, when her health had taken a sharp turn, if there was anything she needed, she paused reflectively, and then asked me to “define the parameters of need.” Was I, she asked, talking about a trip to Ireland, or perhaps to the ocean? After I showed her the ocean on my IPhone, and propped up a picture of Ireland on her windowsill, I realized she was letting me know that she had what she needed, love all around her – from family, community and staff (her second family) and a trust that the God who had companioned her all her life would carry her forward into the trusted unknown.

What she gifted us with, along with kindness, humor, acceptance, and intellect, was the witness of her faith – which enabled her to engage with others and with life itself, non-judgmentally and with respect. Her happiness was rooted in gratefulness and love. And the God who delighted in her in life now delights in her in eternity.

Given by: Betsy Conway, CSJ