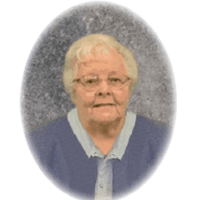 Avis Therese Joyce was one of three daughters born to William and Kathryn Joyce.
With her sisters, Marie and Wilma, Avis grew up in Revere as a member of the Immaculate Conception Parish and attended the schools there.

In September of 1953, Avis entered the Congregation of the Sisters of St. Joseph and on March 19th of the following years, received the habit and her religious name: Sister Marie Frederick. Upon leaving the Novitiate in Framingham, Avis began a lengthy ministry in education, with her first assignment at St. Matthew Elementary School in Dorchester.

Never one to sit idly, Avis sought opportunities to further her education, earning a master’s degree with a focus in reading.
In the mid-seventies, Avis took a series of courses at Massachusetts College of Pharmacy, enabling her to serve as a counselor in drug education and prevention for the Harbor Mental Health Area and the East Boston Drug Action Council. Her initiative in providing after school activities for students led to the revival of the CYO at St. Lazarus, an action for which she was highly commended by the Director of the Council. For a few years, Avis even served as a probation officer for juveniles at the East Boston Court House.

Avis’s teaching placements eventually brought her back to the East Boston – Revere area, a territory with which she had great familiarity. It was while she was serving as principal of St. Lazarus School in East Boston that the school was closed. Avis assisted families in placing their children in other catholic schools of the area, while competently seeing the many tasks involved in the schools closing.

In March of 2010, Avis accompanied her niece, Joyce, who traveled to China to adopt a child. Kathryn, the adopted daughter, enjoyed a special relationship with her aunt, Avis, who kept among her treasured possessions pictures and cards that Kathryn had made just for her.

During the sixties and seventies, Avis helped the Coca-Cola Company by being a faithful fan of her favorite soft drink, TAB. Some may consider it coincidental that just recently Coca Cola announced the retirement of TAB. Like many of us for whom technology was not integral to our education, Avis found herself challenged in navigating the complexities of emails, attachments, and the like. Whenever she sought assistance from Sister Anna, she would note that the computer will be “waiting in the street” – an indication of her frustration.

Over the past two years or more, as Avis encountered some health challenges, I had the opportunity to accompany her to hospitals and emergency rooms. Her sense of humor, even in the face of serious illness, never failed to cause anxiety to dissipate. During one of her recent hospitalizations, Avis was transferred from one Boston hospital to another. The nursing staff of the original hospital called me to learn what had happened to Avis. They were truly delighted to know that she had been successfully transferred to Bethany.

As was her custom, Avis had endeared herself to the staff, although her time there was brief. There is an old Irish saying about those who “go to heaven with their hands full” because of the many small things they have done well.
Certainly, Avis is among that number!