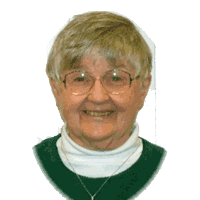 Our mission of unity requires that we be Christ’s healing presence among people, as we strive to alleviate ignorance, suffering, and oppression through spiritual and corporal works of mercy and through efforts which promote justice.

This statement from the Constitution of the Sister of Saint Joseph reflects the manner in which Barbara, S. Patricia Mary, lived her life. Whether as an innovative educator in schools throughout the Archdiocese, or as a listener and caring presence to the marginalized youth on the streets of Boston, or in her role as victim advocate and Pastoral Ministry in the Archdiocese of Anchorage, assisting priests new to our country become adjusted to American culture, or ministering to the elderly, Barbara epitomized this statement, embodying the essence of its meaning through her relationships with all whom she encountered.

Barbara was also an individual who spoke her truth with uprightness and veracity, interjecting humor where appropriate,  and knew that even in her illness, especially over this last year or so, that it was her prayer, her volunteer ministry and the witness of her life, that she became Christ’s healing presence for others.

Barbara’s parents came from Ireland, settling in Norwood, where she and her siblings grew up.  From her parents she became steeped in love of God, love of family and love of their homeland, Ireland.  She like her sisters, Mary and Sally and brother Jimmy attended the local parish school and then the three girls attended Mount Saint Joseph Academy, now St. Joseph Prep and Jimmy to Cathedral. In 1952, responding to the Spirit’s call stirring within her, Barbara, followed her older sister, Mary, and entered the Sisters of Saint Joseph of Boston.

We, as Sisters of Saint Joseph, believe that relationship is at the heart of our mission.  The sisters here at the Motherhouse, with whom Barbara and Mary shared life, spoke of Barbara’s knack of uniquely touching  lives, residents as well as staff members, whom she frequently met while taking her constitutional or through her volunteer ministry in the various offices in this building.  Her listening, attentive heart generated a positive influence.  She was always ready to affirm and encourage, and willingly sharing her gifts: quick wit, political insight, strong opinions and creative imagination. Think about the enjoyment she brought to the residents when she wrote the epic saga of the adventures or misadventures of Brett, Scarlett, Allston and Brighton.

Illness never stopped Barbara.  She was unwavering in her conviction to live until she could no longer do so.  She was not timid but up to the challenges she knew she was

facing. Freely acknowledging God’s goodness to her, Barbara prayed for courage and the gift of letting go, indicating by the example of her life the truth of the words of the song “… all is gift my friend, all is gift from her loving God”.

Even the oncology Doctors and the nurses in the ICU and 6th Floor were impressed with Barbara’s positive attitude, humor, fortitude, breadth of understanding about her own illness, and of her gratitude to them for services she received.

Barbara was a keen observer of life, a risk taker, demonstrating a spirit of determination, resilience, kindness, generosity and welcome. She was so aware of the ills of the Church and society and open to healthy dialogue on these issues. Barbara lived our CSJ charism of unifying love throughout her life, and sought to be of service to the underserved, acting justly, living humbly and walking tenderly with her God. Communicate, collaborate and connect seemed to be her mode of operation.

She, together with Sisters Marie Keough and Barbara Whelan founded Bridge Over Troubled Waters.  There they diligently dedicated themselves to helping homeless and troubled youth.  Many nights Barbara drove the Bridge van which provided services and assistance to the young people on the streets of Boston.  Through her genuine care and concern, Barbara attempted to gain their trust and over time, help them build right relationships; thus, serving the needs of the “Dear Neighbor” without distinction.

Barbara’s passionate commitment to social justice and work with the youth of the city merited recognition by many, including: the Paulist Center Social Action Committee who granted Barbara The Isaac Hecker Award; The Citizen Training Group, Inc. who presented her The Honorable John Forbes Perkins Award; and from her beloved Mount Saint Joseph Academy was named among the Women of Excellence.  Recognized for her wisdom and contribution to youth, Barbara was invited as a guest of the British Government to participate in the youth leaders study tour in Northern Ireland.

So much more could be said about this valiant woman, indeed no saint, but time does not permit.  I leave that to your own conversations and memory sharing. The readings and music Barbara chose for this celebration of her life today, reveals her belief that she would be united with Christ, and by God’s glory live that transformed life in Christ; they further tell of her deep love of God, of creation and of our beloved country.

However, Barbara also delighted in sharing her experiences of Alaska.  She commented that there is nothing like the awesomeness of the Alaskan night sky and the brilliance and beauty of its stars, its people, creatures, and terrain.  I like to think that her light is now shining brilliantly among those stars and that her God is saying to her, well done Barbara, my good and faithful daughter, come, rest now in my peace.

Sister Barbara’s, sister, Mary, wishes to acknowledge the kindness and helpfulness of so many people over the past year or so, especially, Sister Helen Thomas, S. Claire Morrissey, S. Roseann Amico and our community nurse, Maureen Daily.

I am grateful to all who assisted Barbara and I during Barbara’s illness.  Your prayers, gracious generosity and loving compassion are greatly appreciated. Thank You.