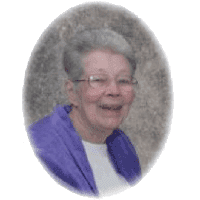 Claire Helen Archambault was one of six children born to Arthur and Helen Archambault.  With her two brothers, Arthur and John, and her three sisters, Margaret, Anne, and Mary, Claire grew up in Haverhill, a proud daughter of the city.  Upon graduation from St. James High School, Claire entered the congregation of the Sisters of St. Joseph.  At the reception of the habit on March 19, 1950, Claire received the name of Sister St. James, perhaps in recognition of her home parish.

Claire’s ministry began, as most Sisters’ did, with a teaching assignment.  Following five years as a teacher of mathematics and science in the junior high grades of St. Paul’s, Cambridge, Claire was missioned to the recently opened Fontbonne Academy.  There, not only did she teach math, but also she had charge of the Choral Music and Glee Club.  Higher education beckoned Claire to pursue further study in mathematics, resulting in a doctorate from Catholic University in Washington, D.C.  As Claire continued her teaching at the collegiate level at Regis College, she also became involved in outreach efforts promoting social justice. In 1971 the congregation initiated a social justice committee titled Rerum Novarum Revisited. As a founding member, Claire was instrumental in the efforts to develop corporate stances, such as the one on nuclear disarmament, in collaboration with other groups, including Network, Pax Christi USA, Oxfam, and NECRI (New England Coalition on Responsible Investment).

The actions of the congregation’s committees on social justice were furthered by Claire’s participation as treasurer of the congregation as well in her roles on the Council as General Councilor and as Assistant President.  Letters to corporate leaders and attendance at shareholders’ meetings were everyday tasks for Sister Claire.  Although she was quiet by nature, her voice was clearly heard as she spoke: “truth to power.”

Claire certainly exemplified what we profess in the CSJ Constitution: We stand with the poor in the struggle for justice, incarnating hope, by seeking to improve the quality of human life.  May this champion of justice be welcomed home by her loving God!