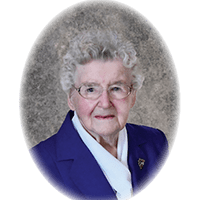 In Sacred Scripture the Psalmist writes that “seventy is the sum of our years or eighty, if we are strong.” (Ps. 90:10)

What can be said of a woman who surpassed these benchmarks?  Surely, Sister Declan Sullivan’s strength was legendary. As proof she marked her one hundred first birthday in December.  Hers was a life rich in blessings, both the blessings that God conferred on her and the blessings she imparted to those whose lives she touched.  A native daughter of Revere, Declan called the fourteen years she spent after retirement in the primary grades of Immaculate Conception School “among the happiest” of her life. She celebrated with great joy her return to the place she held so dear.

Declan was born Lillian Regina Sullivan to Patrick and Mary Sullivan, formerly of Ireland.  Many of us would deem the name Regina fitting for a woman whose regal stature graced classrooms in Randolph and Revere. Declan grew up in the company of her siblings, Frank, with whom she shared a special relationship because they were close in age, George, and Claire. When she completed her studies at Immaculate Conception High School, Declan answered God’s call to religious life as a Sister of St. Joseph.

Following in the footsteps of the early Sisters, who came to the United States to instruct the deaf, Declan sought to open the world of sound and language to children, who were hearing impaired.  Her ministry at the Boston School in Randolph spanned over forty years during which time she served as teacher and as audiologist, a role for which she prepared by advanced studies at Columbia, Boston University, and Northeastern University. At a celebration of Immaculate Conception School in 2003 Declan remarked that her “studies were made easier because of the excellent foundation [she] received at Immaculate.”

Declan’s eighty-three years as a Sister of St. Joseph bear testimony to the Psalmist’s line: “Teach us to count our days aright, that we may gain wisdom of heart.” (Ps. 90:12) Certainly Sister Declan gained wisdom of heart, which was reflected in her gracious manner and her often expressed gratitude to her God, whom she served so faithfully.  May God now hold her in a loving embrace!

If Sister Declan were standing here today, she would say, “Alice, this is not an Omni-directional microphone, speak directly into the mic. So I will.

Sister Declan, Lillian Sullivan and Sister Dismas, Althea Haley, grew up together in Revere. Al and Lil went to see the Reverend Mother in Brighton to ask to enter the Sisters of St Joseph. They were told to wait a year as Lillian was only 16 and Althea’s mother was expecting her 12th child. They did and Lil was God Mother for new baby. Sister Declan and Sister Dismas along with Sisters Sabas and Oswin entered the next year were best friends for life.

I met Sister Declan in 1949 when I was sent to Randolph for my three- month training. I was missioned to the BSD in 1954 and ministered with Sister Declan for 30 years.

Sister Declan was an enthusiastic teacher in the Lower Department and two of her star pupils, Alan Gifford, A retired civil engineer and Fr. Joe Bruce, SJ, one of the Archivists at Holy Cross University, are here this morning. They and all her young students loved Sister Declan.

Although the children at the school were deaf, Sister Declan designed and directed the rhythm program including a 32-piece band with boys and girls of all ages playing bells, tambourines, triangles, cymbals and drums. Every holiday was celebrated with the band and Sister Declan at the piano bringing music and laughter to the entire school. Two of the band members, Margaret McCullough and Pauline Raiche, visited Sister Declan regularly and at their last visit a weeks ago they connected Sister Declan, through FaceTime, with another classmate, Joanne DiSpina, who lives in Rome. Pauline and Margaret, along with many other former students, are here this morning, because they love Declan as did all the teachers and students in the school. Sister Declan was a living example of the selection from the CSJ Constitution on the front of the Liturgy booklet “Relationship is at the heart of mission.”

Sister Declan was fully engaged in every aspect of the life of the students.  She attended every basketball game and was a faithful, enthusiastic fan as John Muir, the Athletic Director at the school, who is with us today, will attest.

When hearing aids became available, there was a need for an audiologist at school; Sister Declan was sent to Northwestern Reserve University, where she earned an additional master’s degree in Audiology and national certification in ASHA-American Speech and Hearing Association.

When she returned to the BSD a new building had been constructed and Sister Declan began her ministry in the fully equipped Audiology Clinic where she administered hearing tests and provided hearing aids for all the children. My office was across the hall from the Clinic and many days I would assist Sister Declan by holding the 3 or 4-year-old when she was making a mold for the hearing aid. When it was done, the little one would give Sister Declan a big hug and say I love you. I would be retreating to my office with a smile and a bit of a tear in my eye.

In service to the dear neighbor, Sister Declan added an out-patient hours at the Clinic in the afternoon where she serviced hundreds of adults and seniors, including many pro-bono needy ones. The Clinic and Sister Declan’s remarkable professional, caring service became very well-known and respected by the ENT doctors and ASHA professionals in the area.

Even today, one of the audiologists who services many of our sisters, Jim Stone in Arlington, when he was a student at Northeastern, did his on-site training under Sister Declan.

Sister Declan’s family Frank and Anne, George and Ellen, Claire and Ray, and their children were faithful visitors to the BSD. The kids loved to play in the gym along with my nieces and nephews. This gave the adults lots of quiet time for their family visit.

When the BSD closed in 1994 Sister Declan accepted Sister Thomas Joseph’s invitation to return to her home parish and live at Immaculate Conception Convent.

I was with her when she was packing up for the move and we decided it would be a good idea to take her portable audiometer with her, as she might do some good with it. Little did Sister Declan know the gift she was to bring to Sister Thomas Joseph and the sisters, to the school and parish for 14 years.

The Conference Room in the convent was converted to her office where she tested the hearing of every child in the Pre-School and Kindergarten classes every year.  She then set up a schedule to provide Speech and Hearing development for those children who needed it. Immaculate Conception was the only school in the diocese which had these services for the students.

The teachers as well as the student’s parents were delighted and so thankful to Sister Declan. When the principal and faculty included Sister Declan’s program in the report for the NEASC evaluation, it certainly assisted in assuring the accreditation for Immaculate Conception School.

Sister Declan also became very active in the Parish, serving as lector and Eucharistic Minister, becoming a vital member of the Immaculate Conception “Morning Church Family”. Two members, Ginger and Frank Romano, who are here this morning, have been so faithful visiting at Bethany all these years bringing abundant goodies for all the sisters and often taking Sisters Declan, Flossie Barton and Mary Shea out to lunch.

Tomorrow we will celebrate the Sacred Triduum of Holy Week. At the Last Supper, Jesus showed us to love one another.

Dear Sister Declan you gave us a faithful witness of this love of Jesus throughout your entire life. We thank you and we love you. May you rest in peace.