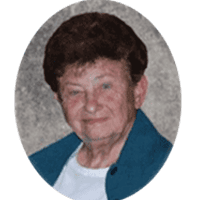 We remember her in the rustling of the leaves and in the beauty of autumn.

Enis Marie Mattozzi was one of seven children born to Guido and Rose Mattozzi. With her sisters and brother Enis grew up in Dedham, attending local schools. When she graduated from Dedham High School, Enis entered the Congregation of the Sisters of St. Joseph. In her early ministries, Enis was an elementary and junior high school teacher. It was in the early sixties when I taught with Enis at Our Lady of Lourdes School. Each day Enis went to school at least a half-hour early. She spent that time tutoring students in math to enable them acceptance into good high schools. And thanks to her, they were.

After nearly three decades of teaching, Enis moved on to a variety of ministries from serving on Boston’s City-Wide Educational Coalition to being the vocational and educational supervisor at the Little People’s School, later the Learning Prep, in West Newton. In each of these endeavors, Enis prepared herself with additional education courses, licenses, and certifications to ensure that she brought the best of competencies to each position.

Not only was Enis knowledgeable in a variety of fields, but she was also very generous with her time and gifts. Her generosity was quite apparent to me when in recent years, I would call her to see if she needed anything or if there was anything I could do for her. Her response was always the same: “If I can do anything for you, Kid, just call me.” I’m sure that I’m not the only caller who heard that invitation.

Indeed, today we honor the life of a woman who finished the race in grand style. We know that our loving God greeted her with the crown of victory at the time of her death and gave her a welcome befitting a true heroine.

Thank you so much for joining us this morning for this celebration of Enis’ life. All of you knew Enis in a special way – friend, colleague, teacher, but there are only nine of us who knew her as Auntie Enis. She was a vibrant, loving, and dedicated person, who left her special mark on everyone, but especially on her family.

Aunt Enis was born just before the great depression to Guido and Rose, two young Italian immigrants. Although their life was very challenging at times, they instilled a strong work ethic and a family closeness that became a part of all of their children.

Aunt Enis was the middle child. She had four sisters and two brothers, one of whom died before she was born. Unlike her taller dark-eyed sisters, she was a petite blue-eyed dynamo. She was smart, popular, funny, and athletic. In high school, she was the star of the basketball team, the news editor of the school paper, a writer of the yearbook, and a member of the drama club. She did it all! She was the only Mattozzi to be awarded a superlative at graduation by her peers. Her high school nickname was ‘Hotsie,’ yes ‘Hotsie Mattozzi,’ which speaks to her great sense of humor, too. She was amazing!

God saw her talent. He wanted her on His team, and she wanted to join. As my mom told me, Grandma encouraged Aunt Enis to work for a while to make sure this was truly what she wanted. Once she entered the convent, her family supported her calling, and they loved her unconditionally. However, there was a sadness that her sisters with whom she shared a room for so many years would not see her as often as they would have liked.

When Aunt Enis was in the convent, she was given the name of Sister Mary Alcide as her sister name. I wondered where this name came from, so I did a little research. Father Alcide spent his young life in the 1800s in France helping the underserved women in prison rehabilitate themselves through the Catholic Church, and he founded the order of the Dominican Sisters of Bethany. In other words, he took on a very challenging task. Kind of sounds like our Enis, doesn’t it?

After she graduated from Regis College and was teaching full-time, she was known as a hard-working, caring, and tough teacher who was admired by her students and colleagues. She was one of a dozen sisters who were selected to go to Chicago to learn the New Math program. When she returned, her mission was also to teach the sisters how to teach this math program. She was clever – she first started teaching the children, and then she taught the sisters. Always diligent, she would check in with me from time to time to see how the students in my school St Mary’s liked the math program. She was also devoted to her parish, and she was a talented artist and photographer. Much later, she even shot my engagement photos.

Everyone in our family kept in touch, and we always visited whenever we could. We always enjoyed going to visit her in her classroom, where there was an unlimited supply of chalk, crayons, and paper. As the years went on and the rules changed, she could visit us and be an active part of our family again. Everyone was thrilled. To watch my grandparents, my aunts, and my uncle together at family occasions or our summer cottage was truly a magical experience. As sisters, I am certain they didn’t always agree, but they always had each other’s backs. In other words, you don’t mess with a Mattozzi.

Around the early 70s, my Grandpa died, and Grandma gave Aunt Enis his cherry red Maverick car. I believe it was one of my cousins who dubbed her the flying nun after the TV show, but my aunt didn’t just fly; she soared.

After 27 years of teaching, she was drawn to the problems of desegregation in Boston. Prepared with a Master’s degree in Urban Education, she worked with Judge Garrity and Mayor White as the Public Information Director of the Citywide Educational Coalition. In that position, she wrote the book Magnet Schools – A Guide for Parents and Students in Boston. This was a major undertaking. If you google her online and look up some of the support material that she wrote, you will see both the depth of her work, as well as her concern for the families affected by desegregation.

Her next challenge was to work as the Manager of Education for the Economic Employment Administration in Boston.

In the 70s, she wrote a curriculum for a fledgling school in Boston called Little People’s School. When I told her that I was changing my major to education to work with special needs children, she was delighted. She got me a summer internship at the school and even enlisted one of the co-founders to drive me back-and-forth to Boston each day. My aunt was also doing work at the school during that summer. It was wonderful to see her every day and be inspired by her commitment to education. After I graduated, she strongly encouraged me to take Sister Alice Mary’s graduate courses in language, which of course, I did. My aunt expected everyone around her to work just as hard as she did.

As time went on, she was recruited to work at Little Peoples, which was now known as Learning Prep as their Director of Vocational Services. She spent 17 years helping disabled children learn horticulture and woodworking. When she retired from there, she devoted herself to learning as much as she could about computers and their applications for education.

In her spare time, she gardened, did woodworking, and was a certified referee in basketball, volleyball, softball, soccer, and lacrosse. She was the third woman to be certified to referee men’s basketball games, but in this case, she had to follow her younger sister Anna who was certified before her. Always helpful, she even enlisted my husband to do some refereeing in the private school circuit. She also enjoyed spending time with her two remaining sisters, my late Aunt Anna and my Aunt Janet. They enjoyed doing things together, and they were a lot of fun to be around. Aunt Enis even enjoyed taking Aunt Anna down to Foxwoods on occasion, but I’m certain it was only to contribute to the Native American charities.

I know she was very involved in the Community of the Sisters of St. Joseph both administratively and in building projects such as the Bethany Hill School and this Chapel. Yes, she could swing a hammer as skillfully as she could shoot a basket.

As a person, she was kind, funny, and honest. However, she didn’t mince words, and she treated everyone as an equal. Certainly, she had adversity in her life from time to time, but her faith in God, her hope for a better tomorrow, and her love for her fellow man always got her through. She also was blessed with the love and support from my Aunt Janet during her illness, and in her later years. As the youngest in a large family, my Aunt Janet cared for her parents and siblings in a very special and loving manner.

A long time ago, Aunt Enis was asked to make a banner for St. John’s seminary to inspire the young seminarians. She found a quote from a Belgian Archbishop to which added her own thoughts. I want to leave you with her quote, “Hope is a duty, not just a nicety. Hope is not a dream, but a way of making dreams become a reality. Happy are those who dream dreams and are ready to pay the price to make them come true.”

We can all honor my aunt by dreaming dreams and working hard to make them come true. She wouldn’t expect anything less.

Given by Janet MacRae Dolan, Niece