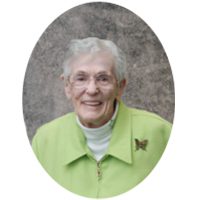 “Our mission of unity requires that we be Christ’s healing presence among people, as we strive to alleviate ignorance, suffering, and oppression through spiritual and corporal works of mercy and through efforts which promote justice. We fulfill this mission through a diversity of ministries called forth by the ever-changing needs of the Church and the world.”  This quote, found on today’s program, was part of the missioning letters that Frances received through the years.

Barbara Mary Blake was the only child of Francis and Abigail Blake.  Born in Brookline and raised in Malden, Barbara entered the Congregation in September 1948.  Her chief ministry was education, although it took many forms from teaching elementary school, serving as reading specialist, to ministering as religious education director, consultant, and pastoral staff member. Indeed, her response to God’s call was “a diversity of ministries called forth by the ever-changing needs of the Church and the world.”

Frances’ gentle presence and her quiet competence made her a valued team member wherever she ministered.  In Vermont’s northern reaches her influence was felt at the Catholic Center of the University of Vermont, the Diocese of Burlington and Catholic schools in Burlington and Williston.  Upon her return to this state Frances devoted time to sharing her spirituality through weekly inspirational thoughts emailed to the congregation and setting the maxims of Father Jean Pierre Medaile to haiku verse.  Her love of writing and of spirituality combined in expressions of musings, as she called them, designed to cause reflection on the ordinary in our lives.

I enjoyed many visits with Frances, reviewing her musings and sharing ideas.  She was a dear soul, gentle and humble, with a twinkle in her eye and a grand sense of humor.  I doubt that I’ll ever walk into a Dollar Store without smiling at the thought of her joy in shopping there.

Like many others, I’ll miss you, Frances, but my comfort lies in knowing that you have achieved true union with the God you served so faithfully. May you rejoice in the reward which is yours!

Given by Sister Judith Costello

During the night a gentle soul, Sister Frances Agnes Blake, was embraced by a loving God, who took her home from earth’s darkness into … Light Eternal.

These are the words that Sister Judy Costello used to tell us that Sister Frances Agnes had died. The image of light and darkness gave me a very fitting framework out of which I might offer these reflections. Another song that echoed in my ears was, “Spirit Seeking Light and Beauty”. Praying with these images and words helped me recall Frances’ life as I knew it.

The first time I heard of Sr. Frances Agnes was back in the early 70’s when a couple that lived in St. Francis Parish in Braintree told me how they deeply admired a sister by the name of Frances Agnes.  They shared that she was a person of great spiritual depth, the holiest sister they ever met.  I did not know Frances then and wondered who this woman was. It took some years for us to connect with one another.  While I was living at St. James Convent in Medford, Frances came there to live and to serve as the Religious Education Director for the Parish.

In the course of time, I came to see that Frances was one who asked the soul searching questions

While the questions were in depth, she went about her days in ordinary ways, always trying to support the teachers and children in ways that were filled with the knowledge of God’s love for them. She prepared very creative prayer services and provided interesting ways for them to relate to the Church, not the least was to organize a Haunted House at Halloween.  I have to tell you it was the scariest one I ever experienced!

It was here at St. James, this sister without any family, met Grace Cunningham and Lorraine Eshbach, two faith-filled women who became family for her. They were great companions to one another.  A fun memory I recall was Frances plotting with me to take Lorraine out to dinner for her June birthday. She asked me to help plan this event with her.  Since money was not too plentiful we thought we would pack a picnic supper and go to the beach in Marblehead, a favorite place for all of us.  We told Lorraine we were going on a mystery ride. When we arrived at her house, she was quite dressed up for this special outing.  All the while I am praying she would not be disappointed with our beach plan!!! Along with this mystery venture, it began to rain! Now we were really in trouble. Luckily we spotted a bench with a covering and enjoyed a memorable birthday “singing in the rain”.  Next time Lorraine did not get so dressed up!

It was not long after St. James that Frances accepted a position in the Diocesan Religious Formation Office in Burlington, Vermont. She also found community with the Sisters of Mercy and joined Sisters Gertrude and Claire in a small group on the grounds of the Motherhouse.  In this atmosphere Frances’ soul was set free.  She loved the people with whom and to whom she ministered, while Gertrude and Claire provided her with a community life that freed her spirit to be all that she could be.  We will always be indebted to them for all they became for Frances not only while she lived in Vermont but also calling her every day after she moved to Bethany. It was also very touching to find in her room many Christmas greetings from the people of Vermont, a tribute to how loved she was.

Ten years ago Frances’ health declined and she came back to Bethany supposedly to die.  At that time she was not able to swallow and it was thought she only had a few months to live.  With the excellent care she received here and the successful treatment that Dr. Jangi oversaw, Frances lived a full life here at Bethany for most of these intervening years.

Here her spirit, while housed in a declining body, continued to seek the light in the way she had been nurturing it throughout her life. She began to write as she once had done for the Diocesan Newsletter in Vermont.

Her first-go at this was the monthly writings called “A Look into the Spiritual Kaleidoscope”. This was followed by Spirituality A – Z the next year.  Our Maxims had been a challenge to her and so she thought of trying to appreciate them in these times by writing them in the form of haiku. You may recall that these were printed up along with some of the art work of Sister Anno Grady.

As we know the last years of Frances’ life were spent writing a book.  She was attempting to take all the wisdom she had gleaned through her spiritual journey and organize it into a complete book. She was supported in this endeavor by Sister Kathy Berube and her sister who helped to type the parts of the manuscript as Frances completed them. I know that this spiritual pursuit kept her going for the last few years. How this work will be completed is now part of the unfolding mystery.  Stay tuned!

It is only fitting that a few lines of one of her own writing would be spoken today which best reflects her soul. These lines come from the series on the Kaleidoscope.

“If God appeared to me in a dream, offering to give me wisdom, I wonder what I would do with it? After pondering that question, I came up with a list of how I would want to use the gift of Wisdom. I would desire the wisdom to put God first in my life and let go of all that would keep me from complete surrender to God.

I would want the wisdom to be convinced that, as valuable as my ministry is, it is more important “to be” than “to do”.  I would pray for the wisdom to see the image of Christ in others even when that image is blurred.  I would hope for the wisdom to realize that spirituality is found in my daily activities and not necessarily only in mystical experiences.”

Thank you for your life among us Frances, Please pray that we may have the wisdom to seek The Light and Beauty that you did all your life.

Given by Dorothea Masuret, CSJ