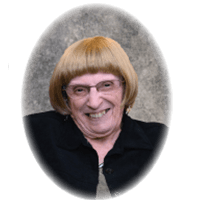 If someone were to ask me what words I would associate with Gloria, I would say, “gentle soul”.

Those who knew her would undoubtedly agree. One of two daughters, Gloria Capozzoli was born in Boston to Robert and Marie Capozzoli. With her sister Jeanne Gloria was raised in East Boston. A year after her graduation from Fitton High School Gloria entered the Sisters of St. Joseph. As was the CSJ custom Gloria, Sister Marie Ligouri, became a teacher. I encountered her at her first teaching assignment at St. Ann’s Neponset where I was a student at the time. I remember her as young, pretty and always smiling. Indeed, every time I met her, Gloria was smiling!

In an article written for our CSJ publication, Soundings, Gloria described her transition from twenty-two happy years of teaching to the field of nursing. The change was motivated by her desire to be more available to the poor and her recognition “that the poor are most vulnerable when they are sick”.  Her journey took her through training, first as a licensed practical nurse, to a bachelors’ degree and licensing as a registered nurse. Early on in her career as a nurse Gloria was frequently assigned to care for dying patients because her supervisors saw in her a compassionate and comforting presence. Gloria credited the sick and dying with teaching her so much about living.

It was evident to all who worked with Gloria that she loved her work as a nurse. During her career Gloria focused on service to the poor, the marginalized, and the disenfranchised, as documented by her service at Marian Manor, St, Joseph Manor and South Cove Manor Nursing Home. Toward the latter part of her career Gloria’ responsibilities were directed toward infection control among elderly patients, as she worked at Goddard House in Jamaica Plain and St. Joseph’s in Dorchester. When Gloria became a resident of St. Joseph Hall, she continued her medical service by assisting in ordering and distributing over-the-counter medicines to help the nurse. Gloria’s life was truly grounded in the God that she served in her ministry of nursing.

When I met Gloria at St. Joseph’s Hall, she told me the story of how she became a Sister of St. Joseph. She believed, rightly, that her path was a deliberate journey, mapped out by God. Not having known any sisters but realizing that she was being called to religious life, Gloria spoke to her parish priest. He, in turn, sent her to visit his sister, Sister Mary Charles, CSJ.  Thus Gloria found her way to the Sisters of St. Joseph, where she served God for seventy-five years.

Certainly Gloria will be remembered as a gentle soul whose love of God and of neighbor played out in a long life of fidelity to what the prophet Micah states This is what Yahweh needs from you: simply do justice, love kindness, and humbly walk with your God.  Micah 6:8

Given by:  Judith Costello, CSJ