We remember her in the rustling leaves and the beauty of autumn. 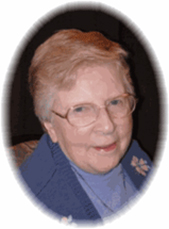 Imagine being summoned by God on the Feast of All Saints! I think maybe God wanted to include another person to celebrate with the “holy ones” in heaven on the Feast of All Saints. We who are here in this chapel know that Sister Helen Fenton (Sister Garnier) was worthy of this honor for indeed she was a Saint! Sister Helen Fenton loved God with her whole heart, and revered all people without distinction.

Helen Marion Fenton entered our Congregation on September 8, 1938 and received the name of Sister Mary Garnier. Throughout her religious life those who knew her were aware that Sister Helen as a woman religious possessed a gentle smile which often revealed her tranquility, gentleness and love. The Congregation seemed to recognize that Sister Helen (Sister Garnier) was not only an intelligent woman, but a woman fascinated with learning.  So, early on in her religious life, the Congregation sent her to study at Boston University, and Boston College until she obtained her PhD in Economics.

Using her knowledge and skills for teaching Sister Garnier began her career as a college professor at Regis College where she taught for twenty six years. Sister not only inspired the college women there, but gave them insights into economic policies. During her academic career, Sister Helen accepted adjunct professor assignments, at colleges in Massachusetts as well as in other collegiate institutions in the United States. I dare say that I know Sister Helen would be embarrassed by the former litany of her accomplishments! She was an unassuming person who delighted in teaching, enjoyed enabling students to learn, and stretching them toward their potential.

During her lifetime Sister Helen Fenton continuously possessed a solid, prayerful life.  She recognized through prayer the great giftedness from God to her. “You are my friend if you do what I command you”, are Jesus’s words found in St. John’s Gospel. Helen knew she was God’s friend… and dedicated her life as a Sister of St. Joseph to answering God’s call by being a caring sister to her siblings and supportive Aunt to her family.

Helen realized that she had been chosen for a special reason and mission in life, to follow God’s lead each day. In this endeavor Helen persevered throughout her life, attending to the needs of others, be they her family, her convent communities, her Congregation, and her students – in essence those who were her “dear neighbor.”

Leaving the Regis Convent to reside at Bethany Health Care Center in 2001, qualities and behaviors of Sister Helen Fenton were observed by the staff and residents. They enjoyed her smile, they relished in the attention she gave them. In her early years as a resident, she took it upon herself as her ministry to deliver to the Sisters printed copies of CSJ news. The Sister residents delighted in receiving them, as well as listening to her words of wisdom. Daily she was seen in her room reading the Boston Globe. After reading it thoroughly, she would give it to her CNA to take home and read. Sister Helen Fenton was in some ways a woman ahead of her time. She heard of a program at BC called the Churchin 21st Century. In addition to lectures, it offered online courses. Discovering and utilizing the computer Helen enrolled in a course for faith formation and was in her words “fascinated by the scholarship of the course and the new ideas they bring to me”.

Until recently, Sister Helen could be seen pushing herself to the dining room to get and enjoy her cup of coffee. So it was that during her sixteen years as a resident at Bethany, Sister Helen Fenton radiated virtues listed within St. Paul’s letter to the Colossians – compassion, kindness, gentleness.    Never a woman to look for recognition, Sister Helen Fenton was filled with humility.

Our Consensus Statement, which is written in the liturgical booklet states:

Stimulated by the Holy Spirit of Love and receptive to its inspirations, the Sister of St. Joseph moves always toward profound love of God and love of neighbor without distinction, from whom she does not separate herself.

God called Sister Helen Fenton peacefully last Wednesday – the Feast of All Saints- because she lived her life dedicated to her vocation as a Sister of St. Joseph. She conveyed our mission throughout her life, living in community with her Sisters, ministry to those who came into her care, and pronouncing God’s message of unifying love.

We, the Sisters of St. Joseph of Boston thank the Fenton family for the gift of Sister Helen, and we give thanks for her presence in our Congregation for the past 79 years. May Sister Helen Fenton, Sister Mary Garnier, experience the fullness of life in God’s loving embrace.