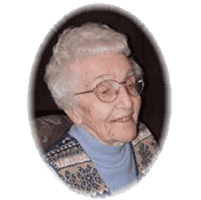 Early Saturday morning, the eve of Pentecost, Sister Herberta Smith was called home to her God.  Her passing unobtrusive, quiet, and peaceful; just the way she would have wanted it.

During the days following, I reflected with appreciation for this hardworking, forthright, open-minded woman, willing to give of herself to be of service to others.  My own knowledge of S. Herberta dates back to the late 50’s and then more recently as her Area Councilor.  My memory was of her in a white habit or later in her Nurses uniform and cap, walking swiftly, purposefully, almost militarily, (if that is a real word), down the Bethany corridor in response to a need of one of the sisters.

Among the kernels of factual information I later learned, was that Marie was the oldest of six, grew up in St. Benedict’s Parish, Somerville, was a 1935 alumna of Mount Saint Joseph Academy, furthered her education and fulfilled her desire to become a nurse. She attended and graduated with an RN degree from St. Elizabeth’s Hospital School of Nursing, served in the military received a marriage proposal and became a nurse here at Bethany until her retirement.

The rest of the story: Upon her graduation from St. E’s, Marie worked assiduously at her chosen profession, then in 1943 even before she was aware of what it meant to serve the needs of the “Dear Neighbor” or to be a healing presence so needed in the world during the 40’s, Marie made a conscious choice to respond to the needs of her country by enlisting in the Army as an Army nurse.  After basic training she was deployed to an Army Hospital near Panama where she cared for the most vulnerable, those soldiers so badly injured they could not return home until major healing took place.  There Marie was recognized for her diligence, empathy, understanding, knowledge, dedication; having the ability to comfort, cajole, and console the men in her charge so that healing would occur.

On January 30, 1946 Marie was honorably discharged from the Amy, as a 2nd Lieutenant.  It was then at age 29 having had such varied and life altering experiences, Marie chose to make another compelling decision, to enter the Sister of St. Joseph.  So, in September of that year she became an integral part of the Party of 1946.  She knew the Sisters, having attended the parish school and then as a “day hop” at the Mount but perhaps it was that deep inner desire nudging her to respond to the Spirit’s call to Religious life…that motivated her… Eve of Pentecost.

It was no accident that the Spirit guided all of Marie’s life choices’, being educated as a nurse, choosing to enlist in the Army, deciding it was right to become a Sister of St. Joseph.  Through much prayer, with God’s grace, and guidance of the Holy Spirit, Marie persevered and grew in her vocation with openness, joy and heartfelt peace.

During her almost 72 years as a Sister of Saint Joseph, S. Herberta was actively engaged in the ministry of health care.  With extraordinary generosity she attended the needs of the children at the Boston School, and to our sisters both at the Motherhouse in Brighton and here at Bethany.  All the while, Herbie, a nick name I never called her, responded to the residents in her care with patience, love, steadfastness and compassion.  No wonder the many that co ministered with her admired, respected and her recognized her to be among the best in her chosen profession……Spirit  Guided.

Prior to her retirement in 1999 Herberta requested and was granted a sabbatical. Her purpose: to allow herself time to slow down and adjust to retirement; and to participate in a structured program that would both challenge her mind and provide the opportunity to be spiritually nourished. Another spirit filled discerning choice.

When her beloved Mount became St. Joseph Preparatory High School, S. Herberta was interviewed for their magazine, January 2013 Inaugural Issue.  In the article she referenced the many changes she experienced over her lifetime and when asked what she thought about the changes regarding the school she responded, “It’s progress and progress is good”.

There was a commercial recently that advertised the movie, The Book Club.  The statement I remember was “some people stop living, before they stop living!”  That was never Herberta’s philosophical approach to life.  When it was obvious that Herberta’s health was declining a recommendation was made that she transition from St. Joseph Hall to Bethany.  Her immediate response was, “I really don’t want to go.  I feel I am still quite capable.  But, if you think it would be best for me, then I will go”.  What a remarkably trusting, spirit filled response that was.  Now was the time for her to be cared for, loved, companioned and supported in a new way.  When she transitioned to the 2nd floor she became one of the most responsive, engaged and involved of the residents.  Perhaps Herberta did not recall all the words to “Sweet Caroline” but she always remembered the words to Take Me Out to the Ballgame.  Always an avid sports enthusiast, her love for the Red Sox never waned.

Throughout her life, Herberta was faithful to caring for and being attentive to the needs of others, of being for them God’s healing presence.  I like to think that the readings and music Herberta chose for this celebration reflected her belief that one day she would be united with Christ, raised from the dead by God’s glory and she too would live that transformed life in Christ;  in a well-kept, organized room in the heavenly mansion.

Herberta heard God’s call and was willing to let God lead her in all the ordinary circumstances of her life.  She served well her God, her country and her beloved community.  Rest in peace S. Herberta.