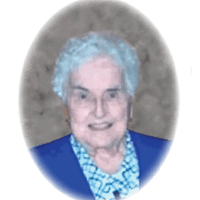 Sister Ivan Cadigan was born to Reuben and Laura Cadigan in Prince Edward Island, Canada, and was baptized Myra Elizabeth. She grew up with two brothers and three sisters. Early in her life the family immigrated to the United States and settled in Jamaica Plain. Sister Ivan attended the schools and received the sacraments at St. Thomas Parish. As a result, she had a long acquaintance with the Sisters of St. Joseph.

In September of 1945 Myra Elizabeth Cadigan entered the Sisters of St. Joseph and on the Feast of St. Joseph in 1946 received the religious habit and the name, Sister Mary Ivan. As was the custom at the time, Sister Ivan’s ministry began as an elementary school teacher in several local parish schools. Sister Ivan became a U.S. citizen when she was in her 30s. The document certifying her citizenship shows a beautiful young Sister (in the traditional habit), whose face radiates joy. Ivan always had a thousand-watt smile!

In the late 60s, Sister Ivan was missioned to St. Rose School in Santa Rosa, New Mexico. True to its nickname, The Land of Enchantment, New Mexico won Sister Ivan’s heart. It was with great joy that Sister Ivan celebrated her silver jubilee on a day that she promised to remember forever. The Sisters from Santa Fe joined the community at Santa Rosa for the liturgy, celebrated by no fewer than six priests. While ministering in New Mexico, Ivan changed from teaching in the elementary school to working as a pastoral minister in a parish. Before returning to Boston, Ivan availed herself of the opportunity to prepare for a ministry in pastoral care through further study. Her program at St. Louis University provided her with certification as a chaplain.

Returning to Boston in 1979, Ivan was drawn to St. Elizabeth’s Hospital, where she served as an Associate Chaplain. Ivan believed that she had found her niche in ministry as she felt that she had a capacity for listening to people and “offering care and solace to the patients, their families, and staff when needed.” For twenty-five years, Sister Ivan was a familiar face in the corridors of St. E’s, greeting staff and visitors and spending hours at bedsides of the patients, particularly those with serious illness and limited prospects of recovery.

Ten years ago, Sister Ivan came to Bethany. My fondest recollections of Ivan were on those mornings when I arrived for liturgy, and Ivan would be sitting out front enjoying the cold morning air. She claimed that her P.E.I. roots qualified her for withstanding colder temperatures than those of us with Boston roots.

Psalm 90 tells us that “seventy is the sum of our years or eighty if we are strong.” Clearly, reaching the age of ninety-five classifies Ivan as a strong woman. Now Ivan knows the peace and joy of union with her God, a wish she often expressed in recent weeks. May she rejoice in God’s never-ending love.