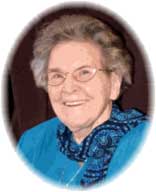 Earlier this morning we heard the reading from the Constitution of the Sisters of Saint Joseph, the section on Community Life, selected by Jane as part of her funeral planning. In it we heard, “Our life together is an overflow of our personal intimacy with God. All we are and all we do is done in praise of God”. I believe that this is the way Jane lived her life; all done in God?s name.

S. Jane Schacht, Seretina, bore witness to those words in her own life and assisted others, especially her students to bear witness to the same. In recent days I gained some insight into the essence of Jane, and gleaned, from her writings, from conversation with those with whom she shared life, from her devoted family, and from her students, a bit about Jane’s quiet influence.

Jane was described as intelligent, a perfectionist, well-educated, an achiever, as having a sense of humor, and quite involved in numerous activities. She loved math, music and singing in the choir was her triump! She says of herself that her presence at community gatherings could be described in the words of the Ivory soap commercial…99 and 44 /100 % participation and was a woman who willingly assumed responsibilities as teacher, administrator, member of the Sister’s Senate, as a companion, or as a volunteer.

During the early days of Vatican II, Jane taught Religion to high school students. She recalls those days as being electrified with everything from shared prayer to peace demonstrations. Through the co-curricular activities which she moderated, Jane encouraged her students to serve the dear neighbors at The Pine Street Inn and to participate in other service oriented projects. The issues of ecology, globalism, peace and justice, were, according to Jane, provocative and challenging. Later as a principal of an inner city Catholic school, Jane tells of working side by side with religious and city leaders in the quest for unity and peace. Jane stated that “This was an awesome grace”. She truly understood and heeded the “mandates” of Vatican II, living the Gospel message, being a witness to others of the Good news, of being rooted in the charism and legacy of our founders.

She said that if she missed Vatican II she would have a serious discussion with God. What do you think she is discussing with her God now?

After 45 years in the classroom Jane discerned what her next steps would be and opted to assist at Bethany Health Care Center first in the Medicare Office, then serving as an Activity Director on the 2nd floor, participating in the literacy program, and companioning residents at the Bethany Hill School, New Beginnings Program.

A few years ago there was a spotlight article in the Mount Saint Joseph Academy magazine, which featured S. Jane Schacht. Because of the effect Jane had on the lives of some of the young women who attended the Mount, and as a testament to Jane for heightening their awareness of service to the dear neighbor without distinction, I thought I would share some remarks from the article. The author of the article was one of Jane’s former students, she wrote about the positive influence Jane had on her life and told of Jane’s commitment to helping others, especially the neediest among us in the city, and of encouraging the young women to extend themselves to the dear neighbor. Each month, according to the author, the students and Jane made sandwiches and served them to the guests at the Pine Street Inn and as another outreach, each fall members of the Red Cross Club made dresses for dolls which would be distributed at Christmas time to children by the Red Cross. During those years Jane ministered as a freshman homeroom teacher and moderator of the Red Cross Club, and was considered a pioneer in caring for the homeless of Boston.

In response to a posting on the internet of Sister Jane’s death, many women, Alumnae of the Mount, wrote of their experience and memories of S. Jane. I quote: A memorable woman who made a mark on the world and touched many lives; My freshman English teacher had very high expectations, she didn’t play around, thanks Sister; Sister walked the walk right to the end; She always had a soft heart and a knack for community service; a dedicated teacher who truly lived the Gospel; God blessed us with Sister Jane, for me she instilled a love of reading great literature and of writing, we all learned to think of the less fortunate differently because of her; end quote. These few reflections from her former students point out Jane’s belief in the words of Isaiah which we will hear during the liturgy: God makes us alive with God’s own life as we serve others in need, setting persons free, helping those who are blind to move from darkness to light.

Over the years Jane herself grew and developed, acknowledging in her quiet way, her many gifts and talents, and was awed, at God’s faithfulness to her. God who is faithful, she wrote, has done wonders for me. Enflamed with the Spirit of our founders to create a new vision of hope for God’s new creation, Jane lived a very active and rewarding life and can now meet her Triune God as a fully alive being.

I invite Cristina and Xyelle to come forward to share their thoughts of Jane. These are gifts that help us recall those times that connect us.

Thank you Jane, for clothing yourself in God’s love, finding your inner light, letting it shine and not hiding it under a basket. You heard God’s word and shared God’s message with all whom you touched. Now sing your heart out with your God for all eternity.