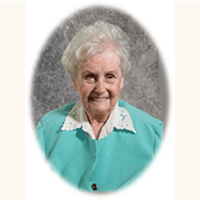 Our mission of unity requires that we be Christ’s healing presence among people.

On my way home from the office on Monday evening thinking about how these reflections would speak of the S. Janet Walsh I knew over these past 6 years, I was struck by three totally unrelated happenings on the same street:  a parked truck with the words, Renew Life; a parked car with a large yellow boot on its tire; and a bumper sticker that stated: a smile is a charity.

On May 6th the day Janet died the all-embracing theme for that Sunday’s liturgy was Love.  It was also the beginning of National Nurses Week and the Boston Globe had a special segment devoted to the recognition of those persons serving in the Health Professions. It takes a special person enjoying qualities such as patience, love, compassion, listening, knowledge, passion, understanding, dedication etc. to be recognized among the best, especially in this profession.

For over 40 of her almost 73 years as a Sister of Saint Joseph, S. Janet ministered to our Sisters here at Bethany, giving of herself and sharing her many gifts in response to the health needs of her sisters.   Certainly these years generated in her much joy and growth as well as a fair amount of challenges. Thus the truck with its imprinted sign: Renew Life.

During the six years that I have had the privilege of relating to S. Janet Walsh as her Area Councilor, I observed in her some of the same qualities I mentioned a bit ago.  Over time, and perhaps with the softening that comes with age, or with God’s gentle spirit working deep within, or Janet’s noticing how much she was beloved by God, or being stimulated by God’s transforming love, Janet was capable of continuing  her  journey in hope.  The boot on the tire: journey, holding fast.

In case you had not realized it Janet’s memory was remarkable.  She would recognize former residents and quietly ask how they were doing. Visitors would comment on her freely given smile of recognition or the gentle manner in which she engaged in conversation.  When I visited she usually looked genuinely happy to see me, would have a comment or quick remark, looked so well put together, color coordinated with matching costume jewelry, thanks in part I’m sure to her caregivers, and when I was leaving, her last words were generally, thank you and I love you. Because Janet prayed to hear God’s voice in the ordinary circumstances of her day, I believe she experienced God’s love animating her.  The bumper sticker:  A smile is a charity.

Many of you know that S. Janet Walsh grew up in Malden and upon graduating from Cheverus High School entered the Sisters of Saint Joseph as a member of the Party of 1945.  She and her only brother Tom were very close. There was just the two of them.  When Tom married Lorraine, the Walsh family expanded.  (There is a contingent of Cheverus Grads who entered the CSJ’s and they are most proud of their Alma Mater.)

Throughout Janet’s ministerial life she was dedicated to caring for and being attentive to her CSJ sisters in various parish convents or to servicing the health care needs her sisters at Bethany.

When Janet’s own health began to decline it was her turn to be loved, companioned and supported.   At the time of her quiet, peaceful passing some of the sisters with whom she served while actively engaged in her healing ministry and current staff members who faithfully attended to her needs were present.  One of the sisters questioned, “Don’t you wonder what she now sees?”

I like to think that she saw and experienced what we will hear in today’s readings and music selections.  Possibly it was the heavenly banquet prepared with rich food and fine wine.  Maybe she saw the God for whom she so longed.   Perhaps she was herself united with Christ who was raised from the dead by God’s glory and now she too was living a new transformed life in Christ.  Or probably Janet saw herself as the wise attendant who had enough oil to keep her lamp burning, awake and ready to meet her God.

Janet heard God’s call, was willing to let God lead her recognizing that God loved her with and everlasting love and called her by name to himself.  She followed her God and her God now gives her new life. Rest and peace, Janet.