We Remember Her
In the rustling of the leaves and in the beauty of autumn. 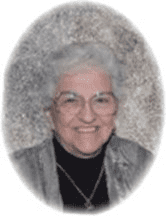 “Gentle Woman”, the hymn chosen by Lorraine Marie for today’s liturgy, is an apt description of Lorraine herself.  Anyone of whom I asked information about her responded with adjectives such as “quiet, gentle, faithful, gracious…”, all those qualities that one would associate with a woman, who modeled her life on St. Joseph.

Margaret Ann DiMare was born in Somerville to James and Margaret DiMare, who had come to the United States from Italy.  With her sister, Lorraine, and her brother, James, she grew up in the parish of St. Polycarp.  Lorraine Marie attended the Somerville Public Schools for elementary grades; however, she graduated from Matignon High School, where she met the Sisters of St. Joseph.  Upon completion of high school at Matignon, Lorraine entered the novitiate in Framingham in September of 1950. On March 19th, 1951, the feast of St. Joseph, she received the habit and her religious name, Sister Lorraine Marie, in honor of her sister, Lorraine.

As a Sister of St. Joseph, Lorraine’s ministry centered on education with her initial assignment at St. Catherine, Norwood, where she moved from teaching grade two to grade six and then grade seven.  She must have been an apt student to eclipse those grades so quickly. Her next assignment took her to St. John, Canton, where she taught eighth grade, followed by a period of serving as principal of St. Joseph, Wakefield. It was her time spent later at St. Joseph, Medford, that brought Lorraine into contact with Sister Peggy Reavy, who became a faithful member of her local community for forty-four years.  When Lorraine and Peggy moved on to Pope John XXIII High School, Everett, Nancy Brennan joined the group and thus began a thirty-four-year journey together, a journey marked by many happy experiences.

When Lorraine ceased to teach directly, she became an administrative assistant at Pope John XXIII High School.  In this capacity, she was credited with unobtrusively keeping everything humming.  It was another instance of her fidelity to responsibility, enhanced by her ability to relate to the dear neighbor.

Lorraine was fond of the ocean and spent time most summers at her family’s place in Marshfield.  She also had opportunities to travel, thanks to her sister, whose work in the travel industry aided the trips.  Peggy reminisced about their excursions to Ireland and Italy, sources of both excitement and joy.

In these days, because life expectancy is long, many of us descend into the realm of confusion and forgetfulness.  We hold in our hearts memories of the person as we knew her in her prime.  As Lorraine moved away from everyday reality her local community lovingly cared for her until recently.  Such is the blessing of belonging to a community!

The Book of Proverbs describes the woman called valiant because of her many virtues.  A life of quiet fidelity and generous service qualifies Lorraine Marie for just such a title.

Strength and beauty are her clothing, and she shall laugh in the latter day.
Lorraine is now freed of worldly cares and knows lasting joy.

Many daughters have gathered together riches: she has surpassed them all.
Lorraine’s life of fidelity and humility stands as her riches.

Favor is deceitful, and beauty is vain: the woman who fears the Lord shall be praised.
Lorraine lived always in prayerful union with her loving God.

Give her of the fruit of her hands: and let her works praise her in the gates.
May Lorraine now be welcomed into a place of light, happiness, and peace.