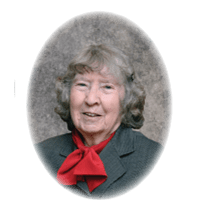 Marcella Campos, (Sister Carmen Louise), was a woman characterized by love.  She loved her native New Mexico, she loved her family, she loved the people to and with whom she ministered and she loved being a Sister of St. Joseph.

When the first Sisters of St. Joseph went to Santa Rosa, New Mexico to open a school, they had no idea how they would influence the residents and the school children.  One year after the Sisters arrived, Marcella Campos was one of three young women, who traveled to Boston to join the Sisters of St. Joseph. As one of nine children born to Napoleon and Louisa Campos, Marcella grew up in a close knit family with six brothers and two sisters. One can imagine the courage that leaving New Mexico required of her; however, Marcella never hesitated to respond to the call of her loving God.

After her profession Marcella returned to her beloved New Mexico to teach, first at Saint Rose School and then at Christo Rey. A brief transition to the Boston archdiocese to earn a master’s degree at Boston College brought her to St. Columbkille and St. Ambrose Schools. Following her time in Boston once more Marcella taught at Christo Rey and then moved into parish ministry in Albuquerque, serving as the director of religious education in several parishes.  In one setting Marcella became a familiar sight, distributing food to needy families from the back of the convent station wagon.  She was also a fierce advocate for social justice when the homes of those in one area of the city were scheduled to be taken by eminent domain to allow for gentrification to occur.

Marcella collaborated with Archbishop Sanchez to establish in Albuquerque an intercommunity house of formation to serve eleven communities of women religious. One of the purposes of the house was to acclimate young women to religious life and its customs so that traveling a distance of hundreds or thousands of miles to a novitiate would be less of a culture shock. In this work and in her investment in the establishment of our Associate program in the southwest, Marcella was viewed as a positive influence and a truly dedicated person.

When Marcella returned to Boston in 2016, she became a resident of St. Joseph Hall.  Each day she made a trip to Bethany to sit with Sister Helen Halligan, to whom she sang Spanish songs reminiscent of New Mexico where Helen had served for many years. Her voice was described as angelic and must have been a pleasure for Helen to hear again. To Helen, Marcella was, indeed, a faithful friend, a true gift.  When Marcella was missioned to Bethany, she maintained her practice of visits to Helen and to other residents as well.

God’s manner of calling Marcella home was somewhat abrupt, as judged by us humans. She may not have deemed it that way, given that she preferred not to draw attention to herself. Now she is united with all those who preceded her to God’s table, especially her dear brother Orlando, and her colleagues Helen and Ivan.  May she enjoy the feast and may her angelic song ring through the heavens for eternity!

Given by Sister Judith Costello