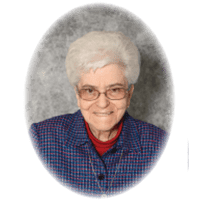 Sister Marian Patricia Feeley was the devoted daughter of Patrick and Mary Feeley and grew up in Jamaica Plain with her beloved sister, Mary. A longtime educator, Marian was known as a hard worker and  a kind disciplinarian who taught with enthusiasm. In a school evaluation, she was described as one who knew how to handle unruly boys in a way that inspired change, and affection.

Marian was steadfast in what she knew – that she belonged to God, therefore she did not fear. “I am not afraid. I gave him my life. (of course, I’ll be with God).”

When reminded shortly before she died  of how loved she was, she responded, “I know. My family and community have been good to me. And I’ve been good to them.”

While a pastoral associate at St. James in Stoughton, Marian was a frequent visitor to the long term patients at Mt. Sinai Hospital, a ministry that was particularly meaningful to her. Because Marian knew the power of education and need for empowerment to immigrants, her last ministry was at the Notre Dame Education Center, where she tutored newcomers to the country.

Marian was proud to be a Sister of St. Joseph and participated actively in her local communities and as a member of the larger Congregation. She also loved dogs –and was a favorite of our protective dogs at St. Angela’s, Mattapan.

Marian was especially close to her sister Mary, and truly longed for her after Mary died. Her nieces, and later, their families meant the world to her. To know Marian was to know the names and the stories of her family.

It was mostly after Mary and her husband, Dick, died that Marian readied herself to go home to God. In her most recent months, she spoke often of her impatience with God for taking so long. In her last days, Marian was peaceful, smiling whenever anyone came into the room, blowing kisses as we left. No fear or anxiety, just waiting to be reunited with those she loved most, and in the arms of the God she always seemed to know was with her.