We Remember Her
In the blowing of the wind and in the chill of winter. 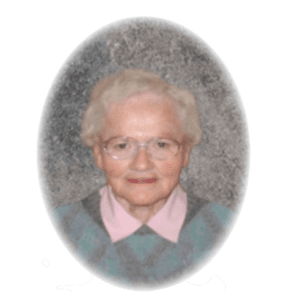 The prophet Isaiah wrote, “On this mountain, the Lord Almighty will prepare a feast of rich food for all peoples, a banquet of aged wine—the best of meats and the finest of wines.”  Isaiah 25:6.   What Isaiah neglected to write was that such a feast would likely be catered by Sister Marie Ancilla, a woman of extraordinary culinary talents and generous spirit.

Sister Marie Ancilla – Elizabeth Ann McCarthy – Betty – was born in Boston to John and Elizabeth McCarthy, and was raised with her sisters Mary, Alice, Edwina, Teresa, and her brother Edward.  Betty’s schooling with the Sisters of St. Joseph began at St. Ann’s in Somerville and continued at Cathedral High School in Boston.  In 1953 she entered the novitiate in Framingham and began her life of service as a Sister of St. Joseph.

Betty’s early ministry was in food service, where she earned a reputation as an excellent chef, baker, and gracious hostess. The number of residents of the convents, where she ministered, ranged from smaller communities of twenty-something Sisters to places like the Motherhouse, Fontbonne Convent and the novitiate, where the dining rooms appeared to be cavernous and accommodated sizable groups. Preparing meals for these communities was not considered a challenge by Betty, who ensured that the Sisters were well fed. In those days the Sister who provided the daily sustenance also served as the lynchpin of the local community. The quality of Betty’s work never wavered and the Sisters knew that they were blessed by her presence.

When needs changed, Betty did also, focusing her attention on the developing Montessori Schools.  For nearly forty years Betty was a teacher of young children, beginning at the Waushakum Montessori in Framingham and then at Walnut Park in Newton, where her tenure encompassed thirty of those years.  The mutual love and respect that the children and their teacher enjoyed was exemplified by the story that the children often rang the doorbell at Maria Convent in Newton to visit Sister Betty outside of school time.  Can you picture it?  “Can Sister Marie come out to play?”

In the summer of 1977, Betty was an instructor in a program promoting the Montessori Method, demonstrating the practices that made that way of instruction an effective one for young children.  The Boston Pilot published an article featuring the summer activities of teaching Sisters, noting that school wasn’t out for them.  Accompanying the article was a picture of Betty instructing two young children as she sat on the floor with them. She looked perfectly at home in that setting as she demonstrated the translation of theory into practice.

Although not the person responsible for feeding the Sisters at Maria Convent, Betty contributed to the life of the community by providing special treats on occasion and also by baking exquisite cakes for special occasions. There was little doubt about her mastery of the craft of baking. On one occasion, when a Sister was celebrating her jubilee, Betty made everything necessary to cater the celebration – an event that was truly memorable.

When Betty transitioned to St. Joseph Hall in 2010, she brought her gifts to enrich the community. There she continued her ministry in a number of ways, driving Sisters to do errands, caring for the dining room, which she kept spotless, and, of course, sharing her culinary skills.

Ever gracious, kind, and gentle, Betty, Sister Marie Ancilla has gone home to her God with hands full of blessings – both those she gave and those she was for others.  May her reward be truly a heavenly feast to rival that of Isaiah’s!

Given by Sister Judith Costello
December 17, 2021