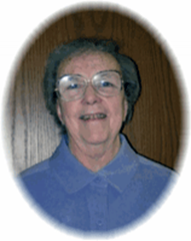 Would anyone of us here in this chapel imagine that early Christmas morning, in the stillness of the night, God would come and take Sister Mary Alice O’Loughlin to her eternal reward. However, I don’t believe it came as a surprise to her because I think that Mary Alice was awakened and heard God’s voice. And gladly took God’s hand in her acquiescent manner with great delight. For we know that Sister Mary Alice was a woman who not only listened to God’s voice but was attentive to it. She was a woman who quietly awaited and rejoiced in the presence of her loving God.

In an article written by Mary Alice for Soundings entitled, “Gladly will I teach”, Mary Alice revealed not only her thoughts on Catholic education, but presented some insight into who she was as a catholic educator and a woman religious. Sister Mary Alice understood teaching as announcing the good news of the Gospel as well as the opportunity to offer her students the chance to know Jesus Christ as a friend, a confidante and a model to follow.

No surprise for us when we look at the religious foundation Sister Mary Alice had within her family life growing up in Medford under the loving care of her parents and bonding with her sister, Anne and her brother, John. In high school at MSJA Mary Alice heard God’s call and answered God’s invitation to become a Sister of St. Joseph becoming a member of the Party of 1947( the Party of the 40 lovely ladies). Missioned from the Novitiate as Sister Ann Marie, Mary Alice began her career as a teacher – primarily as a high school (secondary )teacher, vice principal and librarian, serving in several Archdiocesan high school climaxing her active ministry in Everett at Pope John High XXIII High School for 33 years. It was there at Pope John XXIII High School that she was recognized as a recipient for the Blessed John XXIII Award. It was stated by the principal at the presentation Mass that Sister Mary Alice “embodied the spirit, catholicity and love like Blessed John XXIII as she ministered as an unassuming educator who encouraged students, mentored new faculty, and brought out the best in everyone she touched”. Sister Mary Alice was also commended for the many hats she wore at the school, in addition to the educational skills and talents she possessed.

Sister Mary Alice (Sister Ann Marie) also prepared herself for her role as an educator receiving degrees from Regis College and Boston College. One can surmise she also dedicated and fortified her spiritual life as a Sister of St. Joseph.  Being a woman who was comfortable within herself, many of us witnessed her tranquility, her dignified and unassuming manner. There was even her sense of humor that many of the sisters who lived with her and those who ministered with her remember and enjoyed.

During the past years Sister Mary Alice has presented her amiable spirit as a resident to the Sisters of the Proctor Street Community, Fontbonne Hall, and St. Joseph Hall and to Bethany Health Care Facility.  Sisters and staff who had the honor of living with Sister Mary Alice loved her good-natured personality. Her willingness to accept the changes in her health was admired by all.  Her genial spirit, although sometime hidden, was a ray of hope for all the staff that ministered to her in her illness.  She was truly a genteel woman religious!

The readings and music for Sister Mary Alice’s Funeral Mass were chosen by her. In reviewing each selection of the music and readings it gave me an insight into her individuality and manner of prayer.  Sister Mary Alice was aware of God’s plan for her and appeared to dedicate her life to following that plan. She was attentive and listened to God’s word and seemed to understand that God was with her, so what could be against her. God would give her everything she needed and even desired. Sister’s gospel selection allowed us to realize that she was aware that God had selected her among his chosen sheep. Perhaps the reason was because she had acted willingly and imparted knowledge to the hungry and thirsty, so in time she would “inherit all that had been prepared for her”

We give thanks to the O’Loughlin family for gifting us with Mary Alice’s presence as a Sister of St. Joseph of Boston for these past 69 years. We have had the privilege of having Sister Mary O ‘Loughlin – Sister Ann Marie in our midst. Now we ask Christ Jesus, who lovingly called Sister Mary Alice on this Christmas memorial feast day of his birth to give her a place of eternal peace.

Sister Mary Alice O’Loughlin, may you now know the joy of eternal peace with God.